The Nigeria Customs Service says it has intercepted 16 vehicles and other smuggled items worth over N82.4 million in Katsina in the past four weeks. 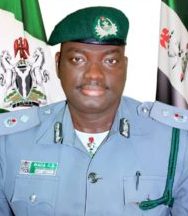 The Acting Controller of Customs, Katsina Area Command, Dalha Wada, disclosed this while briefing newsmen on their successes within the period under review.

According to him, some of the items intercepted include: Lexus car worth over N9.5 million, Daf Truck head worth N8.1 million, Mercedes Benz worth N33.7 million and Toyota Camry worth N6.7 million.

“These 16 vehicles we intercepted within this period, when you add their worth together, they are over N70.9 million.” The controller said.

According to him, the command also during its anti smuggle operation intercepted 217 bags of 50kgs of foreign rice worth over N4.7 million and 16 bags of 25kgs worth N165,000.

“These items were worth about N11.5 million, while the entire arrest within the period under review was worth over N82.5 million. And two suspects were arrested but later released on administrative bail.”

According to Wada, the above success was recorded due to the relentless efforts of operatives in the state, urging them to redouble their commitment.