Kawasaki Heavy Industries, Ltd. has announced that it has held a naming ceremony at Sakaide Shipyard for the LPG (Liquefied Petroleum Gas) -fuelled LPG carrier “CRYSTAL ASTERIA” (Vessel No. 1748), which is being built for Kumiai Navigation (Pte) Ltd. 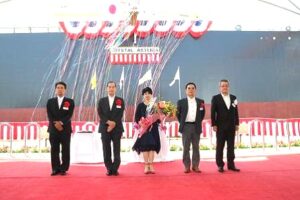 “CRYSTAL ASTERIA” is Japan’s first dual-fuel LPG carrier, capable of running on both LPG and low-sulphur fuel oil. The vessel is scheduled for delivery during 2021.

At the naming ceremony, the vessel was named “CRYSTAL ASTERIA” by Mr. Yagi, Representative Director and Executive Vice President of Astomos Energy Corporation and his wife, Yoshiko cut the ceremonial rope.

As the International Maritime Organization (IMO) tightens regulations on greenhouse gases and other polluting emissions, LPG fuel is attracting attention as a cleaner alternative to heavy oil. In the gas carrier sector in particular there has been a notable acceleration in the move to LPG-fuelled vessels

The introduction of ships fuelled by liquefied gas instead of heavy oil is gaining momentum around the world as an effective way to comply with emission regulations for ships. The new vessel will make use of the expertise the Kawasaki Group has gained through the construction of LPG carriers, LNG (Liquefied Natural Gas) carriers and LNG-fuelled propulsion vessels.

By using LPG as fuel, “CRYSTAL ASTERIA” engine reduces emissions of carbon dioxide and SOx (sulphur oxides) in exhaust gas compared with heavy oil and is compliant with SOx regulations and also EEDI Phase 3, which is required for ships contracted to be built in 2022 or later.

Kawasaki will continue to contribute to the realization of a low-carbon and decarbonized society by developing and providing environmentally friendly ship technologies, including various types of merchant ships that comply with environmental regulations, such as LPG-fuelled LPG carriers, and liquefied hydrogen carriers, which are attracting attention as next-generation energy sources.