Notable ship owners and stakeholders in the nation’s maritime industry have said the federal government’s recent approval of zero import duty ships and ships spare parts into the country is not enough, this is even as they have asked the Federal government to do more in other areas of shipping development. 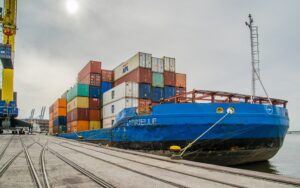 Although the stakeholders commended the Federal Government through the Nigerian Maritime Administration and Safety Agency (NIMASA) for granting the zero duty, they however lamented other areas in the shipping development that need to be attended to.

In a chat with our correspondent, a ship owner and former president of Ship Owners Association of Nigeria (SOAN); Engr Greg Ogbeifun acknowledged that the incentive will definitely go a long way to help the cause of developing the Nigeria fleet, he however noted that there are other areas of shipping that require attention.

He told Shipping Position Daily that, “there is no doubt that such an incentive will definitely go a long way to help the cause of developing the Nigeria fleet, it’s one of the major challenges that the maritime sector is having when it comes to shipping development, it will also help the grass root position of prospective ship owners who want to buy new vessels”.

He also added that, “it is comforting to note that primarily development seems to be coming to terms with the reality that the tax regime needs to be reviewed in order to create enabling environment for the emergence of Nigerian-owned ships, particularly trading globally”.

Sounding a bit skeptical, the ship owner expressed hope that the decision to grant tax waiver is not a Greek gift. “It’s a very good development, we hope it is real”, he said.

He nevertheless, said, more needed to be done for the Nigerian maritime industry. Specifically, he said, “we have to look at our flag register to make it an open register, so that Nigerians will be able to register their ships through the Nigeria register; the zero import duty is a good one, but there is more that needs to be done”.

Also expressing a similar position, a ship owner and former Director General of NIMASA, Dr. Temisan Omatseye, stated that the zero import duty on ships is not enough to make the country a significant maritime nation, he urged the government to create enabling environment for the ship owners to operate.

“Zero import duty on ships is a good one, but it is not enough; we have to take ownership of the shipping Industry, look at what they are doing in Ghana, from secondary school they are teaching them maritime, and the child understands the impact of even throwing a paper to the sea, but we are making ourselves looks like a cult in the maritime industry, rather we should be pulling people to come join us, there is more to attaining a significant maritime nation than just the approval for zero import duty” he said.

On his part, Mr Olayemi Abass, a maritime stakeholder and former Director at NIMASA, in a recent online discuss organized by Harbours and Ports that was monitored by our correspondent stated that the decision of the government to grant Zero import duty exemption for vessels imported into Nigeria is a welcome decision.

He said that the decision will increase indigenous shipping capacity, but noted that access to capital remains a challenge for indigenous ship owners.

He stated that disbursing the CVFF and creating a Central Bank of Nigeria Special Ship Acquisition Fund with a single digit interest rate is necessary to build on the zero duty waiver fiscal policy.

According to him, “the decision of the FGN to grant Zero import duty exemption for vessels imported into Nigeria is a most welcome decision. It is expected that this will increase indigenous shipping capacity.

“Local production may be affected at least for smaller vessels. Since we are not a ship building nation, this may not necessarily be the case.

“However, access to capital remains a challenge for indigenous ship owners. Disbursing the CVFF and creating a Central Bank of Nigeria Special Ship Acquisition Fund with a single digit interest rate is necessary to build on the Zero duty waiver fiscal policy.

“The issue of access to cargo, especially oil and gas by indigenous ship owners must also be addressed as Ships are useless without cargo.

She however said that, in addition to the tax waiver, the Terms of Trade Agreement must also change from Free on Board (FOB) to Cost, Insurance and Freight (CIF). She said CIF represents the charges paid by a seller to cover the costs, insurance, and freight of a buyer’s order while the cargo is in transit. Hence, she said there is still need for other fiscal and monetary policies to support the Zero duty waiver on vessels.

Also stating his view, a maritime captain and former director at NIMASA; Captain Waredi Eniosuoh, said the duty should have been extended also to spares and parts, so that the local commercial boat building industry can also benefit.

He however noted that, while shipping may grow with the zero import duty waiver, and asked if the Maritime Administration is technically and professionally equipped enough to ensure that the possible influx of ships in the country would require a very robust and highly professional survey/inspection regime

He said: “It should have been extended also to spares and parts, so the local commercial boat building industry can also benefit.

Read Also:  TTP To Barge Operators: Your Barges Are Sub-standard

“However, while shipping may grow, is the Maritime Administration technically and professionally equipped enough to ensure that the possible influx of ships in the country would require a very robust and highly professional survey/inspection regime?

“The answer is that; Nigeria lacks the professional capacity to keep any influx afloat for a reasonable length of time. In big maritime nations, inspection regimes are key to its sustenance and survival, when was the last time the Maritime Administration employed a qualified surveyor?

“When the current surveyors due are for retirement, what is the plan for their replacement, when it takes up to 10 years to get a good Class 1 Certificate Holder

“It is not just the ship that matters. What about the local training and certification process for the officers who are internationally recognized”?

“In all of it, regarding this tax waiver on ships, it’s an opportunity for us to get the maritime foundation right before we leap.

“As at today, by my assessment and I stand to be corrected from my background and experience internationally, the Nigerian maritime industry is warped.