The Lagos State Governor, Mr Babajide Sanwo-Olu, on Thursday reiterated his administration’s commitment to sustain the relationship with Mission to Seafarers (MTS) for economic growth and development. 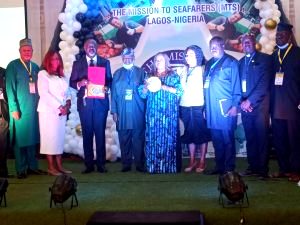 Sanwo-Olu made this known at the MTS Lagos 2021 Symposium with the theme: “Maritime Industry and Development of Nigeria – Connecting with our Heritage.”

Represented by Dr Fredrick Oladeinde, the Commissioner of Transportation, Sanwo-Olu noted that the relationship was necessary with Lagos as preferred location for investors and tourists.

He attributed the development to the available opportunities, hospitable nature of the people and the ease of doing business guaranteed by the government.

“Our administration will continue to synergise and cooperate with all stakeholders and investors in the maritime sector to grow and develop infrastructure and services.

“This will enhance opportunities for regional integration and national development.

“It is for wealth generation and job creation that will benefit our people and all investors in the maritime sector value chain,” he said.

The governor said that maritime sector had always been a critical factor in the socioeconomic, physical and infrastructure growth and development of the global economy.

“It is on record that the earliest recorded commercial transactions across nations were carried out through maritme trade.

“The aquatic potential available in Lagos exposes the state to intercontinental trade very many years ago and this has contributed in making it the cosmopolitan city that attracts people and trade from across the world,” he said.

Sanwo-Olu stressed the importance of developing a virile maritime sector that would boost socioeconomic growth and development for the benefit of people and regional integration of countries that were landlocked.

He said that the maritime industry was a veritable wealth generation and job creation platform which had continued to benefit many people including seafarers, merchant vessel operators and ship chandlers.

“Our administration places premium on the opportunities available to the state due to its littoral status.

“We have developed strategies, programmes and initiatives to ensure provision of adequate infrastructure and services to enhance maritime trade and transport in Lagos,” he said.

On his part, Mr Rotimi Akeredolu, Governor of Ondo State, said that there was a need to collectively mitigate the devastating experience seafarers were exposed to.

Akeredolu, who was represented by the Secretary to Ondo State Government, Mrs Oladuni Odu, said it was the time to go back to the drawing board and rigorously tap into the abundant resources in the seas.

According to him, 80 per cent of the world’s food, fuel, raw material and manufactured goods are delivered by sea and the services of skilled seafarers are critical to this business.

“We must, therefore, thank them for running the global economy, risking their lives for our satisfaction, daring various hazards and displeasures that come their way while carrying out their mandate.

“Also, in Ondo State, we have been able to identify the maritime industry as a strategic driver for the development of our economy, and therefore, leaving no stone unturned to ensure the Deep Sea Port in the state is established,” he said.

Gov. Akeredolu however called on government agencies and stakeholders to collectively mitigate the devastating experience faced by seafarers, go back to the drawing board, and rigorously tap into the abundant resources in our seas as he is leaving no stone unturned to ensure the Deep Sea Port in Ilaje local government area of the State is established.

“For the industry to thrive excellently, it is also necessary for Government to simplify the bureaucratic bottlenecks maritime industrialists experience in the course of documentation and delivery procedures in all Nigerian ports.

“There is need to put all hands on deck to ensure effective ship and cargo handling operations to promote regional and national economy in Nigeria but one thing I consider most important is that we must canvass for development in the maritime industry at every forum” Akeredolu concluded.

Read Also:  MOWCA: FG Says There Was No Election For Sec Gen After Nigeria Protested

He said that Ondo State government would take a leading role in maritime business, and give the needed support to the MTS and other stakeholders.

The Managing Director of the National Inland Waterways Authority (NIWA), Dr. George Moghalu in his paper presentation titled ” The Maritime Industry As A Strategic Driver For Regional And National Economic Development” stated the importance and nexus between the waterways and the development of the economy even as he commended the efforts of the seafarers.

In his welcome address, Chief Adebayo Sarumi, Chairman, MTS, noted that the major reason for having stakeholders gathered was to get their contributions to the welfare of seafarers.

“All countries depend on international trade and seafarers are the ones that sustain this trade, making goods and services get to people and so the need to appreciate their efforts by coming to their aid,” Sarumi said.

The Mission to Seafarers is an international, non-governmental and non-profit making charity organisation with the primary assignment of going on board, visiting seafarers in ports and carter for their well-being.