The Lagos State Government on Friday commissioned the newly-installed Waterways Monitoring and Data Management Centre (WMDMC) at the Five Cowrie Terminal; the headquarters of the Lagos State Waterways Authority (LASWA) in Falomo, Ikoyi. 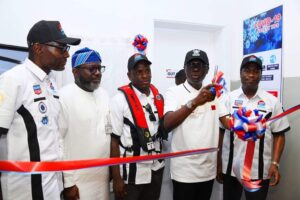 Speaking during the commissioning the Governor of Lagos state; Mr Babajide Sanwo-Olu, said the Data Management Centre, which is first of its kind in the country, is a centralised monitoring base for all activities on the Lagos waterway.

He also commissioned the advanced Aerial Drone for surface surveillance and Blue Eye Pro drone for underwater search and rescue operations, while also handling over units of automatic rescuing gadgets for emergency evacuation.

Sanwo Olu stated that the development further demonstrated his administration’s commitment towards improving mobility through a multimodal transportation system and creating affordable transit options for the residents.

He explained that traffic management and transportation remained a key component of his administration’s economic development plan, stressing that waterways transport had enjoyed special attention in the last three years, because of the need to link it with existing rail and road transportation networks.

He said: “In the last three and half years, our administration has invested massively in waterways infrastructure and assets to deliberately encourage and promote water transportation in Lagos. Our gathering today is to further deepen our commitment to have a safe and secure ferry operation on our waterways. We are commissioning a big command and control centre, specifically established to monitor and protect our waterways.

“We are inaugurating the newly-created Search and Rescue Unit that will be patrolling and enforcing our waterways rules and regulation. We are handing over two additional patrol boats and safety enhancements. We are also launching advanced D.J.I. Aerial Drone, Blue Eye Pro drone for underwater searches, and U-SAFE rescuing gadgets.

“These gadgets are acquired and installed to consolidate our efforts in making our waterways safer for users and making monitoring activities seamless. It also demonstrates our unparalleled commitment to providing a viable alternative transport solution that will complement other modes. This is the investment we will continue to make, in addition to building additional jetties. In the coming weeks, we will be commissioning eight newly-built jetties out of the 15 we are currently building.”

The governor pointed out that Lagos had not only been a responsible regulator in the waterways transportation sector, he said the State had been the leading player in ferry operations across established routes to raise interest of passengers and make the mode of transportation viable for investors.

He informed that the state has invested so much in the area of waterways in the state, he stated that the Lagos state Ferry Services (LAGFERRY) has transported over 1.1 million passengers since February 2020 when it commenced commercial operations with no record of accidents.

“We have invested so much in LASWA that today, we are beginning to see the effects. Over the past three years, daily commuter ridership has increased to 43,000 passengers and over 1.4 million passengers yearly. There has also been a visible reduction in boat mishaps achieved through our massive intervention in safety equipment and donations of free life jackets across the 15 Local Government Areas accessible by water.” 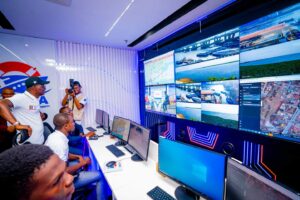 Speaking, earlier the Commissioner for Transportation, Dr. Frederic Oladehinde, said the installed technology was deployed with the objective to solve economic issues associated with mobility delays and improve reliability on water transportation.

He said study showed waterways transportation remained the safest if necessary safety measures were in place. He encouraged Lagosians to use the waterways for improved mobility and decongestion of road traffic.

On his part, LASWA General Manager, Damilola Emmanuel, said digitising the inland waterways operations through the setting up of the command centre would enable the regulatory agency to have intelligent vessel tracking and monitoring along operating routes.

“This is another milestone delivered through the administration’s T.H.E.M.E.S. agenda. The WMDMC has a multi-sensor, multi-layer continuous surveillance with fully integrated fusion. It can detect and track any vessel of any size. It can identify all boats, automatically monitor vessel activities and send alerts on any illegal or suspicious behaviour.

“The centre can generate digitised information files available on any vessel containing the entire history, ownership, and licensing. It is equipped with an integrated and automated system integrated with alerts to enable efficient operator handling of events. It also allows field operators to check and verify vessel identities and pass to external parties.”

Executive Assistant to the Governor on Maritime Matters, Prince Yomi Sopitan, who is the brain behind the Data Management Centre, said the innovation had raised surveillance capability of the state on waterways and addressed safety concerns.

Sopitan said Sanwo-Olu became the first Governor to undertake a complete study, survey and marking of the state’s inland waterways, which led to the removal of impediments on the established routes.

“Prior to installation of advanced technology gadgets, private boat operators in Lagos used to record an average of 19 water accidents yearly. The state recorded only two major water accidents in the year, testifying to improvements we have achieved in the last two years,” Sopitan said.

The President, Association of Tourism Boat Operators and Water Transporters of Nigeria (ATBOWATON), Dr Tanzan Balogun, thanked Sanwo-Olu for rehabilitating some of their jetties and terminals and building new ones.

He commended Sanwo-Olu for provision of a filling station by the waterways in Falomo, Mile 2 and Ojo as well as donation of uncountable life jackets to operators.