The French Ambassador to Nigeria, Mrs Emmanuelle Blatmann, on Friday scored the Nigerian Navy high in its bid to curb maritime insecurity, especially piracy in the Gulf of Guinea. 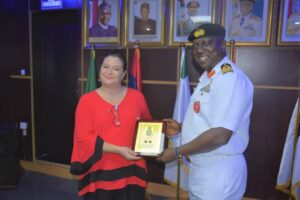 French Ambassador to Nigeria in red, Mrs Emmanuelle Blatmann beside the FOC, Rear Adm. Jason Gbassa and senior naval officers and entourage of the French embassy.

Blatmann, during a courtesy visit to the Western Naval Command, said that this had contributed to boosting the nation’s economic activities.

This is contained in a statement signed by the Command’s spokesperson, Commander Edward Yeibo.

The ambassador said that her visit was as a result of recent bilateral agreement between the French President, Mr Emmanuel Macron and President Muhammadu Buhari.

She said it was to increase defence in Nigeria’s maritime domain, “particularly naval cooperation in the fight against piracy and other forms of criminality in Nigeria Maritime Domain.

“I extol the increased cooperation between Nigeria and France since 2014 and assure that my tenure will work towards improving same,” she said.

The former ambassador to Sudan recalled that President Buhari recently called on the international community to be more active and aggressive in maritime security response.

She said she was looking forward to more collaboration through the European Union’s (EU) Gulf of Guinea Maritime Security Strategy and Action Plan in 2022 when France would be in full control.

Read Also:  Setting Of Revenue Targets For Agencies Reason Behind Influx Of Drugs At Nation’s Port

“It is heartwarming that the French Government is committed to Nigeria’s recapitalisation and training efforts.

“I will be looking forward to an increased partnership when France takes over EU’s leadership in 2022,” he said.

The FOC said that since the arrival of the NNS LANA, the Nigerian Navy had deployed her in various missions such as oceanographic and hydrographic survey, search and rescue as well as patrols.

“Other missions which the ship conducted successfully include ship to ship towing, helicopter winching operations as well as delivering assistance and supplies to other ships,” he said.