Home » Much Ado About the Cabotage Vessel Finance Fund

Much Ado About the Cabotage Vessel Finance Fund

The Cabotage Vessel Finance Fund (CVFF) is an essential part of the Cabotage Act 2003.

An important annexure to the Act is the Cabotage Vessel Financing Fund; a Fund which is derivable from the two percent deductions from all contracts awarded under the Cabotage regime. It was designed to enable indigenous shipping companies acquire adequate tonnage to be able to participate in coastal and inland trade, still currently dominated by foreigners. 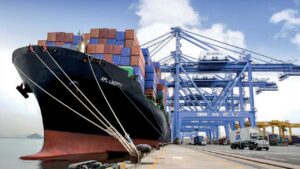 The CVFF has however been untouchable for as many years as it has accrued. Even though the fund keeps swelling, its supposed beneficiaries have not been able to access it.

The fact is that, since the collection started, no one has officially benefitted from the CVFF; all that we have been hearing are promises.

With a lofty objective of deliberately reserving commercial transportation of goods and services within Nigeria’s coastal and inland waters for Nigerian-flag vessels and vessels that are owned by Nigerians, the Cabotage Act spells out four pillars upon which its implementation must rest.

These pillars, especially those that amplify ownership of vessels by Nigerians, underscore the essence of the CVFF, which is akin to a contributory fund by the Nigerian ship owners and beneficiaries of the Nigerian Cabotage system.

We recall that, at a in 2018, the then- Director General of the Nigerian Maritime Administration and Safety Agency (NIMASA); Dr Dakuku Peterside said the agency had concluded necessary documentation needed for the disbursement of the CVFF. He gave the accruals from the fund at that time to be in excess of US$100 million.

And in 2019, the NIMASA DG also told journalists that the CVFF is already in the neighborhood of $124million, even as he raised fresh hopes of disbursement of the Fund to qualified Nigerian ship owners. But, it was never disbursed.

Under the CVFF guidelines, each beneficiary must submit application and needs to tie the loan application to a maritime project, for which 15 per cent of the project cost must be provided, having been pre-qualified by NIMASA.

At a point, NIMASA which is statutorily mandated to disburse the CVFF appointed four banks: Skye, Diamond, Fidelity, and Sterling as Primary Lending Institutions (PLIs) for the CVFF.

A lot of stakeholders have raised one question or the other about the CVFF. A former Executive Director of NIMASA, Engr Nnadi Ogbuagu (now deceased) had accused the NIMASA DG of telling lies about the actual worth of the CVFF. He alleged that the figure which the DG bandied could not have been correct.

Similarly, a former chairman of the board of NIMASA, and currently Vice President, Nigerian Chamber of Shipping, Alhaji Tijani Ramallan had alleged misapplication of proceeds of the CVFF. He alleged that a former DG of NIMASA diverted the money to issues unrelated to maritime.

More importantly, Ramallan expressed disgust that the Ministry of Transportation, NIMASA and others, behave as if the CVFF is a public fund. He says, the CVFF is a stakeholders’ fund and that it should be used for the development of shipping activities.

There have been a lot of back and forth about the CVFF. At some point, there was an announcement that six companies had been prequalified to benefit from the fund; that was the last that was heard of it.

If it is true that NIMASA had for a long time conducted due diligence on the six companies and handed over their names Ministry of Transport, if it is also true that it is the Presidency that is delaying the disbursement, then our fears about the insincerity on the part of government may have been confirmed.

The fact is – the CVFF remains an unfulfilled dream of the initiators and drafters of the Cabotage Act.

Perhaps, it is appropriate to ask at this point: what happened to the six companies that were shortlisted as qualified to access the CVFF a few years ago?

It appears that we have gone past the excuses of blaming the Federal Government and the Presidency. It also appears like the six companies (whose identities were not disclosed) are no longer in the picture.

Why is the CVFF still being warehoused with the Central Bank of Nigeria (CBN), and why are we still at the level of forming committees upon committees.

While not subscribing to the allegation that the Fund may have been misappropriated, the non-disbursement of the CVFF is raising questions.

Between NIMASA and the supervising Ministry of Transportation and the Presidency, there is a lot that is going on that is detrimental to the success of Cabotage Act in general and implies lack of transparency in the CVFF in particular.

Read Also:  Do you the Minister of State; Transportation has the political will to push the disbursement through?

Back to the present: Again, we have been promised that the CVFF would ‘soon’ be disbursed, by the Minister of state, Transportation; Senator Gbemi Saraki. She gave this indication penultimate weekend while interacting with the maritime media.

But, we have passed this route severally in the past!

It is a surprise that events are taking the same pattern. The usual practice is for every DG of NIMASA and the Minister of Transportation to dangle the carrot of disbursement of the CVFF in front of stakeholders, especially ship owners.

Between the DG of NIMASA, and the Ministry of Transportation, there appears to be a conspiracy of not wanting to disburse the CVFF, or is there something unusual or untold about the fund that handicaps them? But the Minister swore that the fund is intact; not stolen and not misappropriated.

The Nigerian maritime industry stakeholders are tired of hearing this same song of; “we will soon disburse the CVFF”. Both NIMASA and the Ministry of Transportation are beginning to sound like a broken record.

If the then-Minister; Mr Rotimi Amaechi said in December 2019 that CVFF disbursement would commence in January 2020. This is July 2022, and we are still being told the same story. This is tantamount to dishonesty and it further reinforces the fears that we all nurse.

The fear is that, government has no intention of ever disbursing the CVFF, period! We pray that we will be proven wrong.