Last week, Nigeria turned 61 years as a sovereign nation. For us as a maritime media outfit, the independence anniversary celebration offers a good opportunity to again appraise the state of the nation’s maritime sector, especially now that the nation is 61 years old. 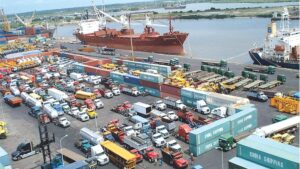 At independence in 1960, the then-leaders of Nigeria probably dreamt of a vibrant maritime sector, no wonder concerted efforts were made to put the ‘first generation’ maritime agencies on a sound footing. It is therefore natural to think that Nigeria, being a 61year-old sovereign nation, must also have a maritime sector that has at least come of age.

These agencies gave a good account of themselves, they were indeed the pivot on which the nation’s economy stood and blossomed. The efficiency with which these agencies functioned was a confirmation of the fact that their creation was not by accident and that their emergence was drawn from a genuine desire to engender sustainable state-owned enterprises.

But, what has become of these institutions? While some were either plundered or out rightly ‘killed’ by subsequent governments (military and civilian), others have been caught in the web of unstable policies.

Painfully, two maritime-related agencies, namely: The Nigerian Ports Authourity (NPA) and the Nigeria Customs Service are the only pre-independence legacies of a once-vibrant maritime sector, that are still standing. Others that were created in the immediate post-independence era or later, are all dead or have ceased being government-owned, or have been offered as political patronages to associates of political leaders.

Agencies like the Nigerian National Shipping Line, National Clearing and Forwarding Agency, Nigerdock; all belong to this genre of ‘failed assets’.

A few others that were created post-independence, like – the Nigerian Shippers’ Council, the then- National Maritime Authourity (now the Nigerian Maritime Administration and Safety Agency) and the National Inland Waterways Authourity are lucky to still remain afloat.

Given the potentials of Nigeria and its vast and natural aquatic endowments, and backed with a good national shipping policy and adequate implementation of relevant legislations and domestication of all relevant international conventions, Nigeria should be a giant among maritime nations, rubbing shoulders with contemporaries with whom she started the journey to becoming a strong nation.

No doubt, Nigeria has grown as a maritime nation from what she was on October 1, 1960 to what she is today, so also have the challenges grown.

In 1960, our ‘maritime worries’ did not include the mass of unemployed manpower which now dot the nation’s maritime landscape.

In 1960, Nigeria did not have to worry about how the nation’s imports were being freighted into the country, neither were our leaders disturbed about other imbalances. Our share of international trade was freighted by the NNSL. Nigeria was simply happy to be counted among independent nations with her own Customs Service and Port Authourity!

With developments, came the challenges of running these institutions to meet the growing needs of a sovereign nation and the peculiar needs of her people. Some people have argued that the 1995 decision to liquidate the NNSL was the best; given the failure of its managers and the abuse that the national carrier was subjected to by government officials and political leaders.

A lot of maritime industry stakeholders are reluctant to agree that the failure of NNSL should be blamed for the mass of unemployment that is plaguing the nation’s maritime sector today. But we ask: where are the national lines of sister nations like: Ghana, Gambia, Cote d’ Ivoire, Cameroun and a host of other African nations who, at independence in the 1960s, also floated national shipping lines. They all did it for national pride. Sadly, the national lines could not be turned into commercial successes for too long.

If government had not liquidated the NNSL in 1995, it would have been privatized in the same way that Nigerdock which was doing extremely well, was sold under questionable circumstances. Had it not been liquidated, it is most unlikely that our NNSL will be able to stand shoulder- to- shoulder with its counterpart in (for example, Malaysia which today is a pride to that country and the whole of Asia.

Even though we join others to lament the decay and failure of the maritime sector and its failure to meet the yearnings of Nigerians (especially since the late 1980s), we are also convinced that the greatest opportunity for a better maritime sector is provided in the policy of private sector participation; a policy which has so far seen the nation’s seaports transformed and become more efficiently operated.

We also agree with those who have argued that the death of NNSL has caused the nation’s maritime industry more woes than any other thing. If we still have the national line, our fleet would have soared since independence, our army of trained seafarers would be engaged.

Sadly, the efforts of the Federal Government through the Minister of Transportation; Mr Rotimi Amaechi to revitalize the nation’s fleet has hit the rock. The Memorandum of Understanding with a Singaporean shipping firm; PIL has failed, dashing all hope that the nation’s maritime sector was heading for rejuvenation.

Read Also:  How will you rate the Nigerian maritime industry at 61 years?

Sadly also, the Cabotage Vessel Financing Fund (CVFF) remains untouchable after about 16 years of its accumulation into billions of Naira.

Notwithstanding the challenges, the maritime sector’s hand is still prominently visible in all facets of the nation’s economy; be it, manufacturing, oil and gas, finance, energy and so on.

Even as we celebrate 61 years of nationhood, Nigeria can still rework her ways back as a ship-owing nation, which will guarantee employment for seafarers and also guarantee sea time for hundreds of young seafarers who currently have no hope of sailing. It requires good policies, good administrators and adequate funding to change this narrative.