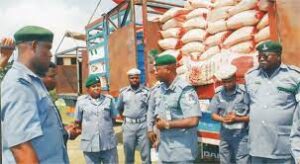 The Commanding Officer, FOB, Navy Capt. Mohammed Abu, disclosed this to newsmen in Ibaka on Tuesday when he handed over the bags of rice to the Nigeria Custom Service (NCS).

Abu said the 265 bags of rice were seized from smugglers between Nov. 26 and Nov. 29 during routine patrol operations by Nigerian Navy Ship (NNS) Thunder, commanded by Navy Capt. Christian Akokota.

He explained that the smugglers of the rice and the boats had earlier been handed over to the Nigeria Security and Civil Defence Corps (NSCDC) for further investigation and prosecution.

He said the seizure followed the directives of the Chief of Naval Staff, Vice Adm. Auwul Gambo, of zero tolerance to all forms of criminality on Nigeria maritime domain, particularly, smuggling of rice and crude oil.

“Recalled between Nov. 26 and Nov. 29, NNS Thunder commanded by Capt. Akokota, seized cumulatively seven wooden boats carrying petroleum products and other exhibits, inclusive are 265 bags of parboiled rice which had been seized and kept in the base.

“Today, we are handing over the seized rice to NCS as part of Operation Tripartite that was initiated by the Office of the National Security Adviser.

“FOB Ibaka is a component of the Joint Border Patrol, I just want to state that other exhibits had been handed over to the Nigeria Security and Civil Defence Corps (NSCDC).

“The joint border patrol which was initiated purposely because of smuggling of rice and that is why we are here to do the handing over of the 265 bags of rice to the (NCS), seized from the boats that were impounded by NNS Thunder.

“On this note, we humbly hand over the rice to Chief Superintendent of Customs, Rasaq Busari and the details are in the handing over note.

“We expect that on the completion, you will revert back to the Nigeria Navy on the outcome of the seizure,” Abu said.

Receiving the bags of rice on behalf of NCS, the Comptroller of Custom, Sector 1 Port Harcourt, Shehu Abubakar, said the custom would do everything possible to stop smuggling in the country.

He added that the NCS would continue to check all economic sabotage in the country.