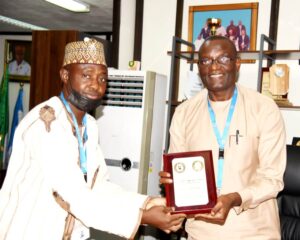 He gave the commendation during a courtesy visit to the new Chief Executive by the leadership of the Cooperative society led by its president; Mr Bashir Ambi

Mr Ambi thanked the Council’s boss for the privilege of the visit despite his tight schedule, and seized the opportunity to assure that he and his team would not abuse the financial trust bestowed on them by members of the Cooperative.

He also informed the Chief Executive Officer that the Shippers’ Council Cooperative is financially stable and members can log in, apply and that approval will be given to eligible members within 24 hours.

He told his host that: “I am glad to inform the NSC management under your leadership that the NSC Cooperative was a recipient of a prestigious award by the Lagos State Government.”

“Sir, we have over 2 Million Cooperative Societies in Lagos State and for the State to recognized our Cooperative, it a great honor not only to the members but to Shippers’ Council, this is because this is the first time since 1987, such type of honor is extended to the Council, which is a welcomed development.

Responding, the Executive Secretary of the Council; Emmanuel Jime appreciated and congratulated the Cooperative Society’s President and his Executives for the award. “This is an attestation of quality of services you have been rendering to your members, which I will join”

The Chief Executive further state that “staff welfare is central to the management, and we want to work in partnership with the Cooperative, so that we can bring succour to members of staff.”