The amount spent on the importation of Premium Motor Spirit (petrol) in the first half of this year jumped to N1.47tn, which is more than 73 per cent of what was incurred in the whole of last year. 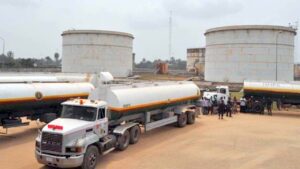 The N1.47tn is about 86 per cent of what the country spent on petrol imports in the whole of 2019, data obtained from the National Bureau of Statistics show.

Petrol imports gobbled up N782.46bn in the second quarter of this year, up from the N687.74bn spent on the importation of the product in Q1, according to the NBS data.

The data also showed that petrol topped the list of products imported into the country in Q2, accounting for 11.26 per cent of the total amount spent on imported products, up from 10.04 per cent in the previous quarter.

The subsidy, which the NNPC prefers to call ‘value shortfall’ or ‘under-recovery’, resurfaced in January this year as the government left the pump price of petrol unchanged at N162-N165 per litre despite the increase in global oil prices.

The Federal Government had in March 2020 removed petrol subsidy after reducing the pump price of the product to N125 per litre from N145 following the sharp drop in crude oil prices.

The NNPC, which has been the sole importer of petrol into the country in recent years, has been bearing the subsidy cost since it resurfaced.

The corporation supplied a total of 6.3 billion litres of petrol in the first four months of 2021, according to data collated from its monthly reports.

In its latest monthly report, it said, “To ensure continuous increased PMS supply and effective distribution across the country, a total of 1.67 billion litres of PMS, translating to 55.79 million litres/day were supplied for the month (April) in the downstream sector.

“The corporation has continued to diligently monitor the daily stock of PMS to achieve smooth distribution of petroleum products and zero fuel queue across the nation.”

Nigeria relies largely on the importation of refined petroleum products as its refineries have remained in a state of disrepair for many years despite several reported repairs.

They noted that the International Monetary Fund, at its June 1-8, 2021 meetings with Nigerian authorities, underlined the importance of doing away with subsidies completely, particularly in the context of low revenue mobilisation.

“The Petroleum Industry Bill, as passed by the National Assembly, contains sections that ensure the disappearance of subsidies, and it remains to be seen if labour unions and civil society groups can be convinced that it is in the best interest of Nigerians,” they said.

The analysts said if petrol subsidies were done away with, an estimated N2tn would be added to government revenue to be shared by the three arms of government.