After a seeming lull in attacks of merchant ships in the Gulf of Guinea with the increased international presence in the region, two attacks with kidnapping were reported today in the vicinity of each other in the region off Equatorial Guinea. Alerts have gone out for the potential of further piracy activity in the region. 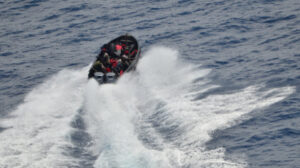 While the details remain scarce at this moment, security consultants Dryad International is reporting that it believes nine crew members have been abducted in the two incidents. In an unfortunate development, they are also reporting that one of the assaults took place on the same vessel that was involved in another kidnapping incident in late October and that today’s incidents are happening in the same general area as the assault on the Tidewater vessel.

The monitoring operation MDAT-GoG first reported a suspicious approach after midnight saying that a skiff was spotted with 12 individuals aboard. This was happening in the anchorage area near the port of Owendo in Gabon. This prompted MDAT-GoG to issue a warning for “an increased high risk of piracy activity for the next 24 to 48 hours.”

Dryad is reporting that three crew members were abducted from the OSV Montet Tide. Pending confirmation of the current incident, the Montet Tide was also the target of an assault on October 25. The offshore supply vessel managed by Tidewater was boarded and three crew members were reported taken in the previous incident that took place hours before pirates attempted an incident with an MSC containership. The Russian Navy took credit for chasing away the boarders on the MSC Lucia before they could abduct any crew members and then together the vessels were seen proceeding to the site of the Monet Tide.

Following a similar pattern to the October incidents, hours after the report of the kidnappings from the OSV there came reports of a boarding of an unidentified containership. The second incident happened about 35 nautical miles away from the first and in early reports, Dryad is saying that six crew members were kidnapped from the containership.

MDAT-GoG reported that one of the two vessels that had been boarded was secured. They also said that Gabon has dispatched forces to the area.

Dryad tallies 2021 assaults on vessels at 10 with a total of 76 individuals believed to have been kidnapped. Most of those, however, were early in 2021 before the increased efforts in recent months by the international forces.

After the incident in which a Danish frigate intercepted a skiff and returned fire killing four suspected pirates, Dryad had cautioned that it was unlikely to immediately affect the pirate attacks. The European Community Shipowners’ Association had cautioned that the threat remained high and called for additional international efforts to protect merchant ships.