Home » PIRACY: Again, European Shipowners Raise Alarm Over Attack On Ships In The Gulf Of Guinea

PIRACY: Again, European Shipowners Raise Alarm Over Attack On Ships In The Gulf Of Guinea

The recent resurgence of piracy and assaults on merchant ships in the Gulf of Guinea are raising new concerns over the continuing problems in the region off West Africa. 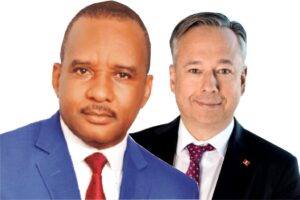 Capitalising on this, the European Community Shipowners’ Association (ECSA) said last week that the latest incident involving a Danish frigate highlights the severity of piracy threats and the need for yet more action by the European and global community.

The European shipowners released a statement in which it expressed extreme concern about piracy attacks in the Gulf of Guinea. They also highlighted the latest incident in South Nigeria, which involved a suspected pirate vessel and Danish Frigate; Esbern Snare that resulted in a loss of life.

Referencing the attack, the group said it only serves to further highlight the severity of the piracy threat in the Gulf of Guinea.

President of ECSA, Claes Berglund said, “the situation in the Gulf of Guinea has been a top priority for the European shipping industry in the past years. The number of piracy incidents and level of violence causes great concerns for commercial shipping and for the safety and security of seafarers sailing in the area,”, said

The ECSA said that it continues to fully support the EU’s activities in the Gulf of Guinea, including the Coordinated Maritime Presence (CMP) mechanism launched in January 2021. The association said the CMP is a positive step to coordinate Member States’ resources in the region, as well as to build cooperation and capacity with the coastal states, as these actions are crucial to address this complex issue.

The recent incidents however, the ECSA says demonstrate that more action is required to address this serious issue. The European shipowners’ community believes that the presence of naval assets is key to ensuring that vessels and their crew can transit safely in the Gulf of Guinea.

“ECSA fully appreciated the commitments already made by some EU Member States to deploy air and naval assets in the region over the past months and years. We would like to strongly encourage Member States to consider this as an issue of high priority and to allocate adequate assets to strengthen maritime security in the Gulf of Guinea,” said Berglund. “This, together with cooperation efforts and capacity building in the area, is key to safeguard trade and development in the region and globally.”

The recent incident during which suspected pirates fired upon a Danish frigate resulting in a firefight that killed four individuals and saw four others taken into custody was the most high-profile incident since the international community launched efforts to reduce the threat against merchant ships. Danish Defense today also issued an update on the incident saying that a review of video taken from the surveillance helicopter appears to show a total of nine people in the boat prior to firefight with the Danes. They said they do not know what happened to the additional person suggesting he might have fallen overboard during the indecent.

The encounter between the Danes and the suspected pirates has however not been the only recent event. At the end of October, an MSC vessel was boarded in the region and a Russian navy vessel took credit for chasing off the assailants. There have been other reports of suspicious approaches as well as incidents on shore in the oil operations.

Other countries have joined Denmark in increasing their support in the Gulf of Guinea. During the summer the U.S. sent a support vessel into the region and in the fall the British Royal Navy also sent a vessel to the region. The efforts by the international community are also in support of a new program with naval and land forces in Nigeria designed to stop piracy activity against both ships as well as resources on land.