Suspected pirates have abducted an operative of the Nigeria Security and Civil Defense Corps (NSCDC) and four contract staff working at the Conoil field in Koluama 1 in Bayelsa. 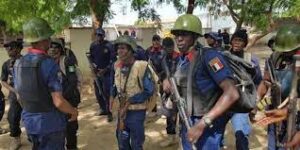 On Monday that the five victims were kidnapped while on their way to Koluama 1 in Southern Ijaw Local Government Area.

The four contract staff are employees of a catering contractor to Conoil.

They were seized along with supplies from Yenagoa for the personnel at Conoil location in Koluama 1.

A family source to one of the seized oil worker told NAN on Monday that the abductors had contacted the family, demanding N25 million ransom.

Meanwhile, youths in the community have raised a search party and making efforts to secure the release of the abducted persons.

Spokesman of the NSCDC in Bayelsa, Solomon Ogbere, confirmed the development.

“I can confirm that we are in receipt of the report of kidnap. One of our officers and four civilians were kidnapped while heading to their location where they protect ConOil facilities.

“They were all in mufti while returning to their base when they were attacked. Investigation is ongoing to track down the culprits,” he said.

NAN recalls that less than a week ago, suspected pirates attacked and killed an NSCDC official and two oil workers, as well as kidnapped seven others in the creek of Nembe local government area of the state.

The state government had imposed a curfew and banned the use of speed boats with 200 Horse Power Engines on all waterways in the state.

Efforts to speak with the spokesperson of Conoil, Mr Abiodun Azeez, was not successful as he neither answered calls nor replied the text message sent to his mobile phone.