12 Nigerian stowaways had to escape from Chinese bulk carrier OPHELIA on Sep 10 or 11, when the ship was sailing along Liberian coast, en route from Lagos to Orinoco Venezuela. 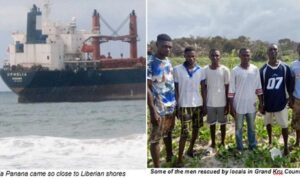 There were 14 of them, who sneaked in and hide on board. As they claimed, two were killed by Chinese crew, after the crew found stowaways, the rest jumped into water or were thrown overboard.

-Details and the whole story are contradictory, insufficient and rather muddy-

-Curiously, ship’s AIS is off since Sep 9-

Of course, it is not clear about all that happened. As the stowaways put it, 12 helpless and peaceful guys have been treated well for some time, then later suddenly, crew became hostile, poured boiling water on them (?) and so on.

-More likely is another version-

Stowaways weren’t all that friendly and peaceful, and attacked the crew, demanding something – probably they didn’t like ship’s destination and wanted the ship to sail to Europe, who knows?

Or even more probably, the ship was to call Liberian nearest port, or turn back to Nigeria, to disembark unwanted passengers (according to Liberian authorities, bulk carrier was sailing very close to the shore, for some time), and of course, stowaways didn’t want it.

The crew members on the ship, believed to be Chinese nationals, reportedly killed the two men and dumped their bodies in the ocean, while the others managed to swim on shore and were rescued with multiple wounds on their bodies during the night and morning hours of September 11 and 12, respectively.

Speaking in an interview with FrontPageAfrica via telephone, the Head of the Joint Security Task Force in Grand Kru, Chris Teah, disclosed that the ship left Lagos, Nigeria about five days ago and passed through the area when the incident happened.

“The ship was less than a mile from the shore. Six Nigerians swam and came on shore. They told us that they were 14 Nigerians and they were told that they were going to Japan. They believed that the crew on the ship could be Japanese or Chinese because they look alike,” he said.

He disclosed that the Nigerians were discovered in the ship after they were banging on the ship to request food from the crew.

They had spent five days without food and water while on the ship from Lagos.

He said: “They were discovered up the deep sea by the crew. They (crew) sprayed hot water on them and two of their colleagues were killed. Six persons swam to get on shore. According to the Nigerians, they got on the ship clandestinely, but when they left Nigeria some five days ago, they went out of food. They started hitting the yacht so that the crew can get the information that people were on board the ship.”

“The crew came and rescued them. They and the crew were like cool for like two days and the third day, they started maltreating them up to the time they hit the soil of Liberia.”

Teah disclosed that a Fanti boat from Grand Cess later went on the ocean to rescue the others who were thrown off the ship.

“Four more persons were rescued from the ship directly and the last two were thrown into the ocean by the guys (crew). The two that were reported killed, we didn’t see them and we don’t know whether they were killed on the Liberian soil or it happened at deep sea.”

Teah pointed out that the last pair of Nigerians thrown into the ocean were also rescued on brought to shore alive, bringing the total number of persons rescued to 12.

According to him, those rescued are currently in the custody of the Joint Security in the county.

“The Nigerians told me that things were not actually working their way in Nigeria and so, they were actually going stowaway.”

“There was no means of getting to the ship. We were on the beach and we could see the ship, not too far from us but there was no communication link.”

He noted that those who used the “machine canoes” to rescue the Nigerians did not get in touch with the crew aboard the merchant ship.

Teah stated that the situation promoted the ship to gradually vacate the Grand Kru side of the ocean until it was seen no more.