Rep. Fred Agbedi (PDP-Bayelsa), has urged relevant authorities to ensure the implementation of the resolution of the Senate that the Atala Marginal Field be restored to Bayelsa State Government. 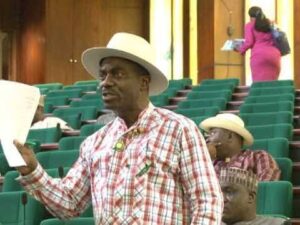 He said this at a news conference in Abuja on Thursday, while commending the Senate for its resolution that the oil bloc be restored to Bayelsa State.

Agbedi, who is a member representing Sagbama/Ekremor Federal Constituency of Bayelsa State, described the allocation of the oil bloc to a private company in 2021 as a devilish deal and an injustice to the people of the state.

He expressed gratitude to President Muhammadu Buhari and the Bayelsa State Governor, Mr Duoye Diri, for their efforts to ensure the restoration of the marginal field.

“The Atala Marginal Field was allocated to Bayelsa State government and was managed by Bayelsa Oil Company. But sometime in 2021, we got to know that Atala has been reallocated to another company.

“Bayelsa and the Ijaw nation and my Federal Constituency rose in protest against it. Mr President sometime ago also ordered that 10 of such marginal fields that were allocated to the states, should be returned back to the states.

“Nine were returned. Only Bayelsa Atala farms was not returned and this was what caused the Bayelsa government, the Bayelsa oil company and our investors to petition to the Senate Committee on Petition and Ethics,” he said.

According to him, even within the hearing period, Mr President further ordered that these blocs be returned to Bayelsa State government, the owners of the oil bloc.

He said this had not happened until the Senate finally resolved through proper investigation and hearings, found out that all the issues canvassed as to purchase and ownership by the new company, Halkin Oil, was fraudulent.

He said the issue of Atala field dispute was a sore narrative in the history of the oil industry in Nigeria, adding that they were happy that a thorough investigation had exposed the heels of a demonic deal.