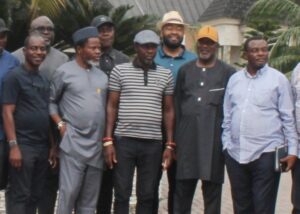 Akptason, in a statement said this in Abuja on Friday after leading a delegation alongside the Chairman, House Committee on Petroleum Resources (Upstream), Mr Sariki Arda on a three-day oversight function to Riverine areas of Delta.

He said the security of oil facilities at the region had resulted to increase in the volume of crude oil production.

He commended the Federal Government, the Navy and Tantita Security Service Nigeria Ltd. for the success, stressing the need for government to look into offshore oil theft.

He acknowledged the successes recorded in the crude oil production as a result of signing of the pipeline surveillance contract with Tantita Security Services Ltd., owned by Government Tompolo.

“In particular, towards enhancing the capacity of this nation to produce and sell oil,” he said.

“We should be able to fund the budget and to promote development of both human capital and infrastructure of this country.’’

He said as a result of the recent partnership between Tantita company and NNPC, the country had seen significant improvement in the ability of this country to produce hydrocarbon.

He said this was basically the major foreign earnings for the country.

He said that as concerned citizens, whatever should be done to ensure improvement in the nation’s capacity to earn income for development should be done.

He said this would also reduce borrowing, which had become a thing of concern to many Nigerians and the effort must be supported.

“I want to assure you that the 9th assembly is going to cooperate with you, we are going to give all necessary support to all the government agencies that are involved to secure these facilities,” he said.