Amb. Oludare Awoniyi, Nigeria’s Ambassador to the Bolivarian Republic of Venezuela said that resuscitating the petroleum partnership between Nigeria and Venezuela would reduce the price of petroleum products in both countries. 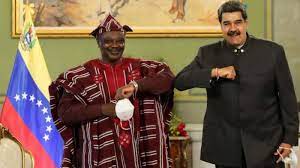 Awoniyi made the disclosure in an interview with the diplomatic correspondent of the News Agency of Nigeria (NAN), Lizzy Okoji, in Caracas.

He recalled that Nigeria and Venezuela had pending agreements which could be mutually beneficial once implemented.

According to Awoniyi, the two countries have large deposits of crude and the agreement if implemented will solve the current crisis of unstable petroleum pump prices in Nigeria.

“In the late 70s to the early 80s, we had an agreement between the Nigerian National Petroleum Corporation (NNPC) and Venezuela’s Pedevesa, which is their own national oil company.

“As a matter of fact, our NNPC was modelled after Pedevesa and as at that time, the President of Nigeria, who is the current President, Muhammadu Buhari was our Minister of Petroleum.

“And on the basis of that agreement we designed the Kaduna Petrochemical Refinery, particularly to process Venezuelan crude.

“But the agreement did not come through because our refineries went into disrepair and more so, Venezuela has been under sanctions their refineries were closed for some time.

“But they have been able to resuscitate some of their refineries and they are now beginning to produce more crude and refining it and they also have excess refining capacity.

“One of the things that will benefit both countries — and we have discussed it with the foreign ministry — is if we can get NNPC and Pedevesa back on their handshake of the past.”

The envoy noted that although Venezuela was under sanction, such agreements with Nigeria could go on without exchange of financial instruments only products.

He explained that if both countries implemented the agreement, it would result to a situation where the excess capacity of Venezuela could actually be used by Nigeria to process its own crude.

“It is not a straight forward process but we can work it out in such a way that we do not have to exchange any financial instrument, more like a swap.

“We give them crude and they give us refined product based on an agreed quantity. That will be of advantage to us because then we will be processing at `factor’ price, basically.

“Also, whatever quantity we process in Venezuela will not require any subsidy. So it is a saving to government’s finance because the government will sell fuel cheaper,” Awoniyi said.