Two persons, including a soldier, identified as Sgt. G Abdullahi, have been burnt to death while pursuing a petroleum smuggler on motorcycle on Badagry-Seme border expressway. 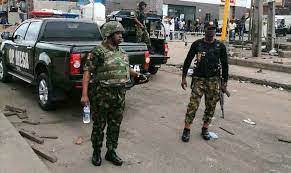 The incident occurred at about 8:15p.m. last Saturday at Sitto area during a head on collision with another petrol laden motorcycle, igniting fire.

It was gathered that Solomon Donna, the petroleum smuggler, had already escaped the check point before he was pursued by the soldier who arrested him.

“Security men at Arakab junction checkpoint, Sitto, Badagry, ordered a motorcyclist who was carrying petroleum to stop but he refused to stop and escaped.

“This prompted Abdullahi to pursue the petrol smuggler, got him arrested, and ordered him back to their check point.

“However, while returning, both followed one-way and had head on collusion with another on coming motorcycle carrying petroleum.

“This resulted to explosion and Donna was burnt to death on the spot while the Abdullahi and another rider were burnt beyond recognition.

“The corpse of the smuggler was later removed by his relations for burial while the soldier’s body was deposited at Badagry hospital mortuary.

The Nigeria Police division in Badagry, however, said it was yet to receive official report of the incident.