Home » Somali Pirates Have All But Disappeared, But Other Threats Remain At Sea

Somali Pirates Have All But Disappeared, But Other Threats Remain At Sea

Cases of piracy in the Indian Ocean have fallen significantly but maritime security experts say other illicit activities remain a concern. 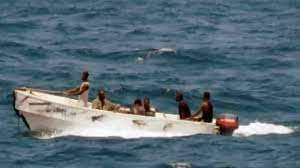 “The industry is planning to altogether remove the high-risk area in the Indian Ocean in January 2023.”

This will come into effect after several reductions in the size of the high-risk areas in the region, which are currently around the Horn of Africa, he said at an event hosted by Trends Research and Advisory.

“This decision comes from the shipping industry itself, a regional stakeholder, and reflects the dramatic decline in actual piracy incidents,” Mr Suorsa said.

However, he and other security experts urged naval efforts to continue as practices such as weapon smuggling and environmental crimes such as illegal fishing remain.

“Especially in Bab Al Mandeb, we have seen terrorist activities and Houthis launching attacks against military and civilian vessels and using means that used to be available only for state actors,” Mr Suorsa said.

On Monday, Houthi drones attacked a ship on an oil terminal in southern Yemen, the third such attack in a month.

We’ve seen attacks using sea mines, limpet mines, anti-shipping missiles and drones and this is significant as all these used to be available for navies and powerful states, and are now available for non-state actors as well and threaten the freedom of navigation and shipping through these critical maritime choke points.”

An estimated 4 per cent of the world’s oil supplies travel through Bab Al Mandeb, which connects the Red Sea to the Gulf of Aden and the Arabian Sea.

Pirates may have redirected their activities after naval coalitions’ intervention to make regional waters safer.

“When we say we have witnessed a decline in Somali piracy, it does not mean that these groups have somehow gone away,” Mr Suorsa said.

“What we now believe is that some of these groups are engaged in other illicit activities and most significantly perhaps is the smuggling of arms and contraband to the war in Yemen.”