Stakeholders have lamented the extent of pollution on rivers, creeks and the ocean caused by 63 years of ‘reckless oil exploitation and exploration activities by oil companies operating in the Niger Delta region’. 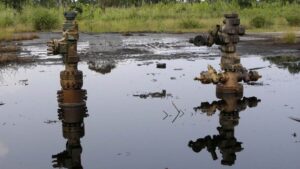 This was made known at the official inauguration of the River Ethiope Basin Institute at the Delta State University, Abraka last week

The Executive Director, Health of Mother Earth Foundation (HOMEF); Rev. Nnimmo Bassey, decried the massive levels of oil pollution in the Gulf of Guinea, as well as rampant sea piracy in the region.

Bassey said that those who pollute the rivers should be held accountable and made to pay for it, in order to ensure that the river is not made a dump site.

He said if pollution continues; it will get to a time where there will no longer be fishes in the rivers and coastal communities will be forced to depend on imported frozen fish.

“A drop of oil can contaminate 25 litres of water. Imagine the extent of pollution in our rivers and ocean by the millions of barrels of oil that has been dumped into them over 63 years of reckless oil activities.

“Those who pollute the rivers and water bodies should be held accountable to ensure that our rivers do not continue to be treated as dump sites.

“The need to preserve the integrity of our rivers, creeks and oceans cannot be over stressed to make this happen, all those interacting with and utilizing our water bodies must do so with respect and place the wellbeing of the rivers and dependent communities before profit.

“The call to preserve our water bodies is a responsibility for all of us. If we fail to protect and preserve our rivers we will continue to have situations where fishers go fishing all day and return with nothing or where coastal communities depend on imported frozen fish for nutrition.”

The HOMEF boss commended the management of Delta State University and the leadership of River Ethiope Trust Foundation on the their partnership to establish the River Ethiope Basin Institute.

“The river is one of the cleanest in the region and stands out as an example of what our water bodies were like before the arrival of the oil industry and their polluting activities.”

Also, a foremost Nigerian architect and community member, Chief Charles Majeroh, said the only way to preserve the River Ethiope was to ensure that human and industrial wastes are not deposited into the rivers and that there is minimal dredging of the river to enable it breath freely.

On his part, the Executive Director of River Ethiope Trust Foundation, Urikefe Dafe, stated that the River Ethiope Basin Institute will be a platform for research and also be a launchpad for the sharing of knowledge and the fight for the recognition of the rights of the river