The Biggest Container Vessel In The World Docks In The UK

The largest cargo vessel in the world, the Ever Ace, measuring longer than four football pitches — has reached the UK. 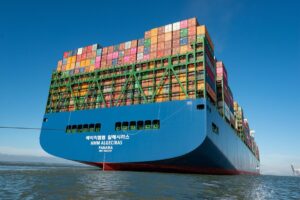 The Ever Ace bears the record for having the most containers loaded on a single vessel.

It reached the Port of Felixstowe in Suffolk, Britain’s busiest and biggest container port, on Sunday morning.

The vessel, which is operated by a Taiwanese shipping major named Evergreen Marine Corporation, arrived in the UK from Rotterdam.

It was built in 2021 and docked at Felixstowe while on its maiden voyage back in September the same year.

It is owned by the same shipping firm behind its cousin, the Ever Given, that had blocked the Suez Canal in 2021 (around March) – resulting in global trade chaos.

Evergreen’s Ever Ace is an even bigger and newer class of container than the Ever Given.