In November 2016, the Nigeria Customs Service said it lost 70 officers to attacks by smugglers, host communities. The then-National Public Relations Officer of the service, Mr Wale Adeniyi, while giving a detail account of how the Customs personnel died, explained that the officers are often attacked in the course of performing their legitimate duties. 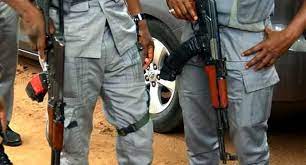 “That is what our record shows in different border posts in Nigeria. As we talk, we are still counting; 70 lives lost. Some are as simple as we make seizures and we are taking the seizures to office and our officers are barricaded and they come under serious attack which often results in fatalities”, he said.

Kolo spoke when the Assistant Comptroller General of Customs (ACG) in charge of Zone ‘A’; Modupe Aremu visited the command, and lamented that officers of the command have suffered several attacks at the slightest encounter.

He also noted that most residents of the border community have been out of job since the closure and as a result vent the anger on innocent officers who go about to carry out their lawful assignment.

And last month, three operatives of the NCS from the Federal Operations Unit Zone ‘A’ in Lagos were killed in an attack by daredevil smugglers in Ogun state, while an unspecified number of others sustained varying degrees of injuries.

The missing body of one of the officers was found floating on Ipaja River in Yewa South Local Government Area of Ogun State, while the remaining two were found dead in Fagbohun Village also in Ogun state.

Investigations carried out by Shipping Position Daily confirmed that no fewer than 30 people have lost their lives since the beginning of this year in face-offs between men of the Nigeria Customs Service, smugglers and residents of border communities.

These are just some of the fatalities from vicious attacks on Customs officers. It is notable that those mentioned above do not include such attacks in different parts of northern Nigeria.

The attackers, who are smugglers and their border community cohorts often confront officers in the course of their legitimate duties.

Suffice it to stress that, among other statutory roles, the Nigeria Customs Service is saddled with the responsibility of controlling the inflow and outflow of goods.

This is no doubt, a security and economic duty, which calls for the support of border communities, because it has been confirmed that there are well over 1000 illegal routes leading into and out of Nigeria. The legal ones are manned by the Nigeria Customs Service, but the illegal ones are the theatre of confrontation between officers, smugglers and resident of border communities.

Apparently, buck-passing on the frequent face-off between his officers and inhabitants of border communities, the Comptroller General of Customs; Col Hameed Ali (rtd) has often accused the border communities of aiding and abetting smuggling.

From the perspective pf the Customs boss, members of the border communities are protecting the smugglers, attacking and killing NCS officers.

We recall that, at a forum at the National Assembly to defend the 2021 budget of the Customs Service, Ali pointedly said: “But we cannot effectively police borders. We can only make efforts through the third tier to curtail smuggling. We need other agencies and the communities to help us. Until that is done, Customs is willing to do what it can to stop that.”

What that statement simply meant was that, personnel of the Customs are overwhelmed in tackling smuggling, and are blaming members of border communities for this.

The truth also is that, Customs officers are in the front line of attack, and they are bound to also defend themselves in the face of risks to their lives.

We are quite aware that, officers are often at the risk of attacks by smugglers and their cohorts. We know that some officers have been maimed, while some were killed in face-offs with smugglers. We are however in awe as to why there is always a huge cry whenever smugglers and their collaborators are killed by Customs officers; either in self-defence or in the pursuit of smugglers.

Read Also:  How do you think the frequent clashes between inhabitants of border communities and Customs officers can be resolved?

Some have argued that, Customs officers are only mandated by the law to arrest and arraign smugglers in their pursuit to protect national integrity. They also argued that, it is not part of their mandate to pursue smugglers to the town and shooting indiscriminately.

Yes, the extra-judicial killings are unacceptable. Yes, there is no justification on the part of Customs officers to shoot at defenceless and unarmed border residents and even smugglers.

We are perturbed at the disturbing silence that often greet attacks on Customs officers. The National Assembly members who take advantage of their positions as lawmakers to condemn Customs and even use their office to elicit the legislature to lampoon the NCS, are often quiet when the table turns. The Civil Society groups have also been quiet, especially in the case of the latest attack in Ogun state which led to the death two officers.

We stand with the Nigeria Customs to say that Customs officers lives also matter!