Among other statutory roles, the Nigeria Customs Service (NCS)is saddled with the responsibility of controlling the inflow and outflow of goods. 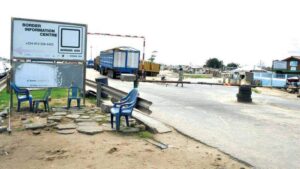 This no, doubt is a security and economic duty, which calls for the support of border communities, because it has been confirmed that there are well over 1000 illegal routes leading into Nigeria. The legal ones are manned by the Nigeria Customs Service.

But there have been issues between the Nigeria Customs Service and the border communities, sometimes these issues degenerate to squabbles and deaths.

Investigations carried out by Shipping Position Daily confirmed that no fewer than 25 people have lost their lives since the beginning of this year to face-off between men of the Nigeria Customs Service, smugglers and residents of border communities.

Let us look at some of the details. At the beginning of this year, precisely on January 8, men of NCS reportedly killed three commercial drivers at a checkpoint in Baruten, Kwara State during an attack at one of its checkpoints. Also in February 2021, one person suspected to be a smuggler was killed while three others were injured in a clash between Customs officers and smugglers in Ogun state.

While protesting the death of their colleagues at the Governor’s Office Oke Mosan in Abeokuta, the suspected smugglers accused men of the Customs Service of conspiring with the Lagos officers to swindle them of their goods, having collected bribes for ‘easy passage’ of those goods in Ogun state.

Also in March 2021, residents of Agosasa community in Ipokia Local government area of Ogun state were thrown into mourning as officers attached to the NCS Ogun Command I, allegedly shot and killed a 15-year-old girl, Sekinat Agbelade.

The victim who was reportedly on an errand, was hit by a stray bullet from Customs officers who were chasing a smuggled vehicle. The teenager allegedly died from the injury sustained from the bullet at a private hospital.

Apart from the deceased, two other persons; namely Oluwole Oladosu and Saliu Babalola, were also reportedly injured by stray bullets.

And in May, five indigenes of Iseyin Local Government of Oyo State were allegedly also killed by men of NCS while also pursuing suspected smugglers.

The latest in the attacks was that a few weeks ago, officers of the NCS stormed the Igangan town in Ibarapa Local Government in Oyo state in the evening, while also pursuing smugglers leading to the death of three members of the community.

Apparently, buck-passing on the frequent face-off between his officers and inhabitants of border communities, the Comptroller General of Customs; Col Hameed Ali (rtd) has often accused the border communities of aiding and abetting smuggling.

From the perspective pf the Customs boss, members of the border communities are protecting the smugglers, attacking and killing NCS officers.

We recall that, at a forum at the National Assembly to defend the 2021 budget of the Customs Service, Ali pointedly said: “But we cannot effectively police borders. We can only make efforts through the third tier to curtail smuggling. We need other agencies and the communities to help us. Until that is done, Customs is willing to do what it can to stop that.”

What that statement simply meant was that, personnel of the Customs are overwhelmed in tackling smuggling, and are blaming members of border communities for this.

While we may agree with the Col Ali that his men are also in the front line of attack, the extra-judicial killings are unacceptable. There is no justification on the part of Customs officers to shoot at defenseless and unarmed border residents.

We are quite aware that, officers are also at risk of attack by smugglers and their cohorts. We know that some officers have been maimed, while some were killed in face-offs with smugglers. We are however in doubt as to whether the attack on Customs officers were orchestrated by inhabitants of border communities.

By the repeated and unhindered attacks on unarmed dwellers of borders, the Nigeria Customs Service may have been going beyond their briefs. Customs officers are only mandated by the law to arrest and arraign smugglers in their pursuit to protect national integrity. It is apparently not part of their mandate to pursue smugglers to the town and shooting indiscriminately.

Read Also:  How do you think Customs officers can operate at the border posts without endangering lives?

There is no evidence, so far that the border inhabitants who were killed were smugglers.

May we also asset here that, all those that are often tagged as smugglers are not, until the Court pronounces them as such.

Of greater concern to us is the fact that inhabitants of border communities are often at the mercy of the duo of Customs and the daredevil smugglers.

Reports from many border communities have revealed that many times, smugglers drive into the communities to seek refuge away from the pursuits of Customs men.

Sadly, once the latter pursues the former into border communities, it is the hapless dwellers who pay the price.

Our position on the matter of shooting and killing of inhabitants of border communities is that border dwellers deserve to live and should not be targets of trigger-happy Customs officers.