A U.S.-sanctioned Syrian vessel has arrived in Lebanon from the Black Sea carrying a cargo of wheat, and Ukrainian officials assert that it is the latest in a string of cargoes believed to be stolen from Russian-occupied territory. 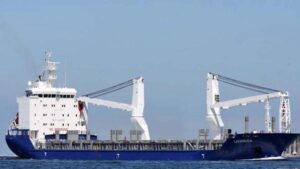 The 13,000 dwt Syrian freighter Laodicea – a notorious U.S.-sanctioned vessel – called in Tripoli on Wednesday. She arrived on a voyage from the Black Sea, where she had been operating AIS-dark for two weeks. The Ukrainian Embassy in Lebanon asserts that while Laodicea’s AIS was turned off, she called at the Russian-occupied port of Feodosia and took on 10,000 tonnes of flour and barley; according to the embassy, the cargo had been stolen from occupied Ukrainian territory.

On Thursday, Ukrainian Ambassador to Lebanon Ehur Ostash met with Lebanon’s president, Michel Aoun, to raise the matter to his attention and ask for the Laodicea’s cargo to be investigated. Ostash emphasized that the matter of stolen grain “could damage the bilateral relationship.”

Aoun is dealing with an acute wheat shortage on the home front, and Ostash also discussed the supply much-needed Ukrainian wheat to Lebanon. Ukraine has 20 million tonnes of wheat to export, and it is awaiting the implementation of a safe-passage accord to end a months-long Russian blockade. Shipping could resume as early as Friday.

The Laodicea is owned by the Syrian state, and she has been implicated in long-sanctioned trading between Russian-occupied Crimea and Syria. She was blacklisted by the United States Treasury in 2015, along with the Syrian vessels Souria and Finikia.

Syria’s government is supported by and closely aligned with the Russian state, and its vessels and ports have been implicated in the stolen grain trade. Multiple vessels suspected of carrying stolen Ukrainian grain from Russia have turned off their AIS just outside of Syrian waters – like the Russian bulker Matros Pozynich, which allegedly delivered a stolen cargo to Syria in May.