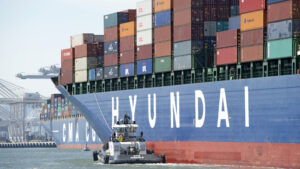 Some 453 staff voted in the seafarers’ union strike ballot last weekend, more than 90% backing action in protest at a reluctance to give generous salary increases after a pay freeze between 2011 and 2019, due to the company’s poor performance in those years.

Meanwhile, the union said it would extend negotiations by a week, to 1 September.

The union said: “We don’t want our request to be misunderstood as asking for more money, but our dedication to the company hasn’t been recognised.”

Union officials said Swiss-Italian carrier MSC was offering to employ all its members, and so far 317 HMM seafarers have tendered their resignation.

An HMM spokesman told The Loadstar: “Negotiations are continuing. Both sides remain open-minded in talks. Preventing and avoiding extreme situations, including strikes, are the most important reasons why both parties have continued to negotiate, despite differences in their position. The management and the union are well aware of where they stand, so we will keep negotiating to reach a mutually beneficial agreement.”

However, management’s negotiating position will have been undermined by the, now hollow-sounding, staff new year’s message from president and CEO Jae Hoon Bae: “I would like to thank all of you who have done your best in your respective roles over the past year. I would especially like to express my deepest appreciation to of HMM’s off-shore employees working at sea, who have devoted themselves, not only to cost reduction, but most importantly, to safe navigation. Please know that your efforts are deeply appreciated by all of us here at HMM.”

HMM said the company could suffer a $580m loss if the strike went ahead.

Meanwhile, terminal operators in Busan are preparing contingency plans for moving cargo if the strike hits the port, particularly terminals catering for THE Alliance, of which HMM is a part.

Busan is Korea’s main container port and the largest box transhipment hub in north-east Asia, accounting for 75% of Korea’s container traffic. Any disruption to HMM’s operations would have a domino effect on Busan’s operations.

The operators of Busan New Port Piers 1, 3 and 4, which have a service contract with THE Alliance, are paying close attention to the negotiations between HMM and the union.

Yonhap News quoted one terminal operator as saying: “The most worrying thing is that an HMM ship entering the port could become inoperable once the crew gets off.”

The 11,000 teu HMM Promise arrived at Busan New Port on Tuesday and, after being unloaded, departed for Long Beach yesterday, but other HMM vessels are due tomorrow and Sunday.

Busan Regional Office of Oceans and Fisheries and Busan Port Authority say they are in close contact with the terminal operators and helping to design counter measures in the event of a strike.