The Nigeria Customs Service (NCS), Western Marine Command, says it intercepted 232 sacks of marijuana worth N1.1bn between July and September, this year. 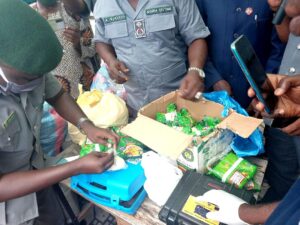 Customs and NDLEA officers unwrapping some substances suspected to heroin concealed in a carton of Indomie noodles that were seized during a stop and search operations along the waterways at Pashi, in the Yekeme axis recently, by operatives of the Western Marine Command of the Nigeria Customs Service.The Acting Area Comptroller, DC Enonche Ochiba, told a media conference in Lagos, on Friday, that used foreign shoes, second-hand clothing, Premium Motor Spirit (PMS), foreign Rice, hard drugs were also intercepted during the period under review.

According to Ochiba, the coastal and harbour patrol officers, together with the Comptroller’s Surveillance and Monitoring team, while on patrol along Kuramo Beach accosted and intercepted the 232 sacks suspected to be Cannabis Sativa, popularly known as ‘Marijuana.

He said no arrest was, however, made as the smugglers dived into the sea on sighting the patrol team.

Ochiba added that while on stop and search operations along the waterways at Pashi, in the Yekeme axis, the operatives of the Command discovered some powdery substances suspected to be heroin concealed in a carton of Indomie noodles weighing 1.52Kg and valued N40, 860,841.02.

He said that one suspect had been arrested in connection with the seizure.

“Also, 45 packs of 225mg Tramadol Hydrochloride with a Value of N954,934.02 was intercepted at the Yekeme axis and some sacks suspected to contain expired drugs with a total value of N62, 252, 794 were also seized on the Abumbum-Ojo waterways.

“Other seizures made between July and September are: 883 Bags of 50Kg foreign parboiled rice, 49 sacks of used shoes, 44 sacks of new shoes, 245 kegs X 25 liters of PMS, one 40 Hp Yamaha outboard engine, six bales, and three sacks of second-hand clothing and bags.

“The sacks of drugs were evacuated to base and upon physical examination, they were found to contain drugs that had expired on April 27, 2017 with a total value of N62,252,794.00.

The Customs boss noted that the seizures were achieved as a result of the re-organization of the anti-smuggling activities of the officers of the command.

Ochiba, while handing over the seized drugs to the National Drug Law Enforcement Agency (NDLEA), commended the inter-agency collaboration between sister agencies and the Nigeria Customs.

“Let me use this medium to commend the Nigerian Navy for their support to the anti-smuggling drive of the command and also the NDLEA, together with other sister agencies, for their support.

“This seizure is a symbol of the cordial working relationship with sister agencies and also depicts that the security agencies have no overlapping functions in the discharge of our statutory responsibilities,” he said.

The NDLEA Area Commander and Assistant Commander, General Narcotics, Mr Samuel Gadzama, while receiving the seized drug items, acknowledged the synergy and cooperation between the Nigeria Customs Service and the NDLEA.

He commended the Service for their continued support and the improved working relationship, particularly since the new Chairman of NDLEA Gen. Muhammed Buba Marwa assumed office, charging them not relent but intensify their efforts for the good of the nation.