Home » What You Need To Know About Monkeypox

According to the latest Monkeypox situation report of the Nigeria Centre for Disease Control, Nigeria recorded 15 confirmed cases of monkeypox in seven states between January 1 and April 30, 2022. 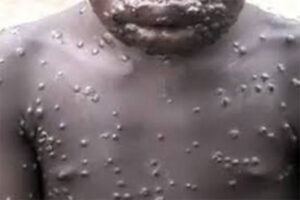 The situation report was made available in Abuja on Tuesday.

Lagos and Adamawa states have the highest figures of three cases each.

The confirmed cases, the NCDC said, were from the 46 suspected cases recorded during the period.

Monkeypox is a rare smallpox-like disease that occurs primarily in the rainforest countries of central and west Africa.

The disease was discovered in laboratory monkeys in 1958. Studies of animals in Africa later found evidence of orthopoxvirus infection in some African rodents.

The virus has been isolated from an African tree squirrel, which may be the natural host. Laboratory studies showed that monkeypox also could infect mice, rats, and rabbits. In 1970, monkeypox was reported in humans for the first time.

Later symptoms occur one to three days or more after the appearance of fever and include a rash with raised bumps, often first developing on the face.

Monkeypox can spread to humans from an infected animal through an animal bite or direct contact with the animal’s lesions or bodily fluids.

The disease can spread from person to person, although it is not as contagious as smallpox.

Monkeypox can be fatal in up to 10% of cases.

The first symptoms that occur are nonspecific – fever, sweating, malaise, and some patients may develop a cough, nausea, and shortness of breath.

About two to four days after fever develops, a rash with papules and pustules develops most often on the face and chest, but other body areas may eventually be affected, including mucus membranes inside the nose and mouth. These skin and mucus membrane pox lesions can ulcerate, crust over, and then begin to heal in about 14-21 days. In addition, lymph nodes usually swell during this time. Some pox lesions may become necrotic and destroy sebaceous glands, leaving a depression or pox scar that, with monkeypox, may gradually become less pronounced over a few years. The toxemia that was seen with smallpox is not seen with monkeypox.

What is the cause of Monkeypox?

Monkeypox is caused by the Monkeypox virus, which belongs to the orthopoxvirus group of viruses. Other members of this group of viruses that cause infections in humans include variola (smallpox), vaccinia (used for smallpox vaccine), and cowpox viruses.

What are the clinical features of monkeypox?

In humans, monkeypox is similar to smallpox, except that enlargement of lymph nodes (lymphadenopathy) is associated with monkeypox. About 12 days after exposure, the illness begins with fever, headache, muscle aches, backache, swollen lymph nodes, a general feeling of discomfort, and exhaustion. Within 1 to 3 days (sometimes longer) after the appearance of fever, the patient develops a papular rash (i.e., raised bumps), often first on the face but sometimes initially on other parts of the body. The lesions usually develop through several stages before crusting and falling off.

How long does monkeypox last?

The illness typically lasts for 2 to 4 weeks.

Studies of human monkeypox in rural central and west Africa – where people live in remote areas and are medically underserved – have reported case-fatality ratios of as high as 10%.

How do people get monkeypox?

Monkeypox can spread to humans from an infected animal through an animal bite or direct contact with the animal’s lesions or body fluids. The disease also can be spread from person to person, although it is much less infectious than smallpox. In human transmission, the virus is thought to be transmitted by respiratory droplets during direct and prolonged face-to-face contact. In addition, it is possible monkeypox can be spread by direct contact with the body fluids of an infected person or with virus-contaminated objects, such as bedding or clothing.

Is there a treatment for monkeypox?

Currently, no treatment is available for monkeypox. The smallpox vaccine has been reported to reduce the risk of monkeypox among previously vaccinated persons in Africa.

What should people do if they think they have been exposed to an animal or person with monkeypox?

Persons who think they may have been exposed to a person or an animal with monkeypox should contact their health care provider.