·Gets Support To Become Electro-Technical Officer

Gafar Olatunde, a young Nigerian man, has proved that if you have a skill and are good at it, you can succeed in life even without any formal training or education!

He took to LinkedIn to narrate his success story of becoming a certified maritime officer repairing broken ships from someone trying to build gadgets with capacitors and electronic circuits.

Olatunde was always interested in gadgets. He started his journey by combining resistors, transistors, and capacitors to design an electronics circuit. He built an invention with the help of these electronic circuits, and after facing many failures, he was finally able to create it. 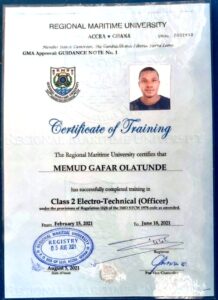 The switch to the maritime industry started for Olatunde when his friend introduced him to his superintendent boss. The superintendent called Olatunde to his office and, after a long discussion, stated, “If you can get this vessel back to fully operational mode, I will reward you well.”

When Olatunde reached the location where the ship was anchored, he was stunned by the sheer largeness of the ship. All the crew members, captains and the chief engineer welcomed Olatunde.

After briefing him about the task at hand, the chief engineer asked him how many months it would take to get the ship running. Olatunde replied that he only needs two weeks. It left everyone in shock. However, true to his words, the genius could solve the ship’s synchronisation issue and make it functional within two weeks.

Read Also:  QUESTION OF THE WEEK: What does a ship’s Master do, where does he work?

The chief engineer was impressed with the job done by this young man without any formal training. He took him under his wing and briefed him about his bright career. The chief engineer offered Olatunde a job too.

Gafar Olatunde agreed to the offer and took formal training to become a certified Electro-Technical officer.