“If you criticize me in a constructive way that allows me to be a better person, I have no complaints” – Emmanuel Jime

“Once I am done, let there be something I can point out to that says I was impactful in my time as the Executive Secretary”

“If we have the NTC, I’m not too sure that the Consumer Protection Agency will actually extend to the point that they did”

Last week, the Executive Secretary of the Nigerian Shippers’ Council; Mr Emmanuel Jime received some journalists at the Council’s Apapa head office. It was his first media interaction since his appointment. The brief but impactful meeting offered an opportunity for an insight into the Executive Secretary’s thoughts, plans and hopes for the Council. Shipping Position Daily was there. We serve you this abridged representation of what transpired 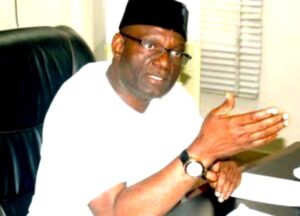 How has it been since your assumption of office as the Executive Secretary of the Nigerian Shippers’ Council
There is an understanding that we have to get some clarity in the regulatory framework that we have, some clarity in the processes that must be impacted upon in this maritime domain. This is because my understanding is that once there is clarity and rules and everyone is playing by them, then we will all achieve our goals; whatever those goals may be. Particularly if they are goals that can positively impact the business that all of us are involved in. So when we are talking about transparency, we are talking about efficiency and a regulator that is unbiased. Not showing any particular bias or interest to anyone, only one interest which is to make sure that the environment in which these people are practicing their trade is the one that everyone recognizes and clear. Going back to the word “clear”, I believe that if there is clarity, almost everything else most likely will fall in place. So this is what we plan to do and I am going to invite you in a more formal environment and present my agenda to you, so that we can interrogate it. By the way, I’m also going to need you not only to be singing praises, but to be critical as much as you can be in a way that gives me direction. If you criticize me in a constructive way that allows me to be a better person, I have no complaint. In fact, I have always thought that the moment it is only songs of praises, it means that there is something wrong somewhere because there is no way any human being is perfect. Honestly, I’m going to make my mistakes and I will try to correct them because there will be someone who is pointing you in a direction that says there is a better way of doing this. Once it is constructive, it will be a team played together. Everywhere I have been with all due modesty, I have always gone into an environment where I have tried to impact and do the little I can to change and be dynamics. It is not going to be different here. This assignment is the same. So my determination is that four years down the road, once I am done, let there be something I can point out to that says I was impactful in my time as the Executive Secretary. As I said, I cannot be able to do that until I have the support of the members of our team and in this case the gentlemen of the press. But I will ask you to please give me a little more time. We won’t take long; so that I can invite you to a press launch. Let us really launch my own agenda together. I am going to need you on this journey.

Invasion of shipping lines by Federal Competition and Consumer Protection Commission
The DG of the Consumer Protection Agency has actually written to me to apologize when the matter came to my notice, because we sought to intervene. Firstly, he actually admitted that they should not have done what they did without passing through the Nigerian Shippers’ Council, since it happened in our own sphere that we are regulating. But regardless of course, as a Consumer Protection Agency, they have a mandate that really allows them to take certain steps. But of course, it is understood that we ought to do things the proper way. They needed to have notified and informed us to seek our collaboration. The understanding is that we should have collaborating efforts and not any government agency waking up and deciding that because I have all the powers. So I think the direct answer to that is that, there is a recognition that that intervention was not handled according to proper procedures. We have acknowledged that and I think they have acknowledged that too. We are now in the stage of actually examining the full facts so that we can see first- what does the law say as regards their powers? And also to get the shipping companies that were breached so we can speak to them with an understanding of what really are the issues. Then we can now come to a conclusion one way or the other. This is because our job here is not to take sides with anyone.

What do you feel as the CEO of Shippers’ Council?
Yes, we regulate the industry and of course, we seek to also protect; but that is to the extent that you are also right and you get the protection that we should offer you. So if obviously what you are doing is not correct, it is the Shippers’ Council responsibility to point that out and let you know that you too have to take a look at the mirror and see whether your processes need to be amended or some sort of corrective measures should be taken. So the summary is that Shippers’ Council is intervening and we are looking at the issues on both sides of the divide, so that we can call someone to order and say if it is the Consumer Protection Agency that is wrong, this is the extent to which they have gone wrong and this kind of thing should not be allowed to happen again. If it is the shipping companies that have an issue, we will let them know that maybe the Consumer Protection Agency did the wrong, thing but I will call them to order, but you too take a look at your system a see if we should do some corrective measures as we proceed. So long and short, we are intervening and we believe that at the end of the day we will come to a conclusion and resolution in a way that benefits the industry.

Did the Shippers’ Council receive any complaints about infractions against the shipping lines?
No complaints came to us, so obviously; we were not able to do anything except if they had complained. I also need to make it clear that some level of advocacy is still required and that is why these kinds of partnerships are useful to the extent that stakeholders were unaware that complaints should be lodged to the Shippers’ Council. Then if we do not get complaints as I said, we will not be able to take any action. But advocacy is in the direction of letting stakeholders know that if they have a problem, the go-to agency that they can complain to is the Shipper’s Council. So I think that is the first thing.

Putting this behind, henceforth what will it be for Shippers’ Council?
Let me also say that there is now an effort to make sure that the Shippers’ Council also has teeth that we can bark and bite. That is the reason why the Government in its wisdom set up the inter-agency platform, that is the Port Process Manual (PPM) and the Shippers’ Council was given the responsibility of being the lead agency. Now that particular platform also has some teeth. They can bite, they can arrest. Recently I told PPM that we too have cause to exert some sort of intervention that ordinarily will not have been expected in a commercial environment. Again if people get to know that if they get to Shippers’ Council maybe it might not take the speed of light, but you can still achieve your objectives in a way that is more conducive to the environment; because this industry is a commercial environment on a civil space more than a criminal environment. The advent of armed men as much as possible needs to be discouraged. This is not the way we expect the security men to be showing up. But sometimes maybe at the last resort when everything else has failed, even we at Shippers’ Council use the PPM as the platform to make sure that there is enforcement of the rule that we are putting in place. I think those are the angles we should be looking at. Most importantly for us, please we need advocacy. Let the people know that the Shippers’ Council is the go-to agency where they can complain through the port services portal which is available 24/7. It is an online platform. Once you put your complaints there, in the next one hour, somebody is already talking and listening to you. I think a lot of people may not know that we have that kind of facility.

Read Also:  CRFFN Elections: “The Ministry may have collected almost N16Million from those who have picked nominations forms” – Prince Adeyinka Bakare

Looking forward, what do we expect?
I believe that the National Transport Commission(NTC) is a far more elaborate legal framework and I think the industry is really waiting for that instrument. This is because if it comes, it has encompassed some of the powers that appear to be resident in some other agencies of the government. It is not a one-stop shop in the sense that we normally have in an industry setting. Putting it better, I will just say that there is a lot more power that is contemplated by that particular legislation. Part of the reason a lot of people have been resistant was actually because some of the NTC provisions appear to have appropriated a lot of powers that are exercised by different agencies; that is bringing it under one cover. If we have the NTC, I’m not too sure that the Consumer Protection Agency will actually extend to the point that they did. Once that law is put in place, it will give the regulatory agency (although It may probably not be the Shippers’ Council), but then it would be the port economic regulator or better still transport sector regulator. I envisage that a lot more powers are available within the provisions of that particular legislation under consideration.

Tags: Emmanuel JimeIf you criticize me in a constructive way