Arguably, the automotive industry in Nigeria is one of the poorly-regulated sectors, a development which has given birth to the surge in the use of second-hand vehicles and high cost of locally-assembled ones. 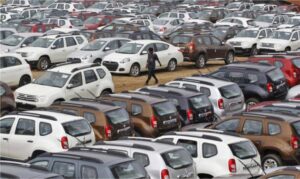 Apart from the Federal Government’s assertion, recent investigations carried out by this newspaper at the two biggest vehicle terminals in Lagos; that is, PTML Terminal and Five Star Logistics Terminal, as well as the Berger Auto Market Apapa have also revealed that 70% of the vehicles coming into the country are in violation of government’s automotive policy

According to the National Bureau of Statistics (NBS) Nigeria spent a whooping N1.08 trillion to import used cars (popularly called Tokunbo) and motorcycles (Okada) in one year (October 2018 – September 2019).

According to the various NBS reports gathered, used cars and motorcycle importation into Nigeria rose from N252.3 billion in the fourth quarter (Q4) 2018 to N301.8 billion in Q3 2019.

Also, the nation recorded a total of N1.28 trillion as the value of “used vehicles” (popularly known as Tokunbo) and motorcycles imported in one year (Q3 2019 – Q2 2020). This is according to data obtained from various foreign trade reports released by the National Bureau of statistics.

When compared to N899 billion recorded for the same category of imports in the corresponding period of Q3 2018 – Q2 2019, it represents an increase of about 42%.

Worried by the trend and the culpability of the nation’s land borders which were being used to ferret these vehicles illegally into the country and the apparent loss of revenue, President Muhammadu Buhari, in December 2016, placed a ban on importation of vehicles through the land border.

When the ban was introduced, the intention was to encourage local production to drive the development of the nation’s automotive sector as a major boost for the country’s economy.

Prior to the ban, Nigerian importers had complained that the dwindling exchange rate of the Naira to the Francophone countries’ CFA has made bringing in cars through Cotonou unprofitable.

From available data, Nigeria produces less than 10 per cent of the vehicles used in the country. Primarily, a few companies like Hyundai and Honda assemble in Nigeria; the parts are imported as knock-down and not produced in the country.

The Federal government initiated the Automotive Policy in a bid to provide a framework that will support automobile companies, boost local content and establish a vehicle financing scheme that would provide funds for citizens to buy new cars.

The NAIDP represents Government’s boldest step at reviving local car assembly in over three decades. The policy seeks to encourage local manufacture of vehicles while phasing out the importation of used vehicles.

Other motives of the policy include job creation, stimulation of the value chain, diversification of the economy, provision of affordable vehicles for the average Nigerian, as well as boosting foreign direct investment into the country.

In trying to implement the automotive policy, the National Automotive Design and Development Council (NADDC) increased tariff on importation of new vehicles to 70 per cent as a way of discouraging Nigerians from buying vehicles from outside the country.

But, the objective of the policy has been largely defeated owing to the apparent seriousness of the part of the Federal Government.

We recall that, the Federal Government had promised to unveil a vehicle financing scheme some years ago that would afford Nigerians the opportunity to purchase vehicles with only 10 per cent of the market total price of the vehicle, and window of many years to pay the remaining balance at an interest rate of six-eight per cent. Up till now, the scheme is yet to take off.

Read Also:  Looking at the rate of smuggling and high cost of new vehicles, Do you think the Auto Policy has been successful?

We need to also stress here that, the high tariff structure introduced on imported second-hand vehicles at 70 per cent levy and duty, was not aimed at boosting government’s revenue, but at discouraging importation and attracting more investments in local production.

But, this has also not achieved its purpose, going by the huge volume of sued vehicles that come into the ports.

What is however apparent is the fact that importers of used vehicles have now resorted to importation of used vehicles that have been involved in accident or that have been damaged. Their aim is to pay less duty and with their ever-ready collaborators in Customs uniform, they get away with it. Sometime, without the mandatory Salvage Certificate, they pay far less duty than the 70 percent.

Finally, perhaps what should happen is a comprehensive review of the Automotive Policy, which should take care of the worries of local players in the automobile industry, including vehicle assembly plants and dealers.