Two piracy and maritime crime-related events climaxed recently. One was the abduction and eventual release of eight persons in the waters of Rivers state. The abductees were travelling to Port Harcourt from Kula area in Akuku-Toru Local Government Area of the state when the gunmen seized them at the Kula-Abonnema waterway. 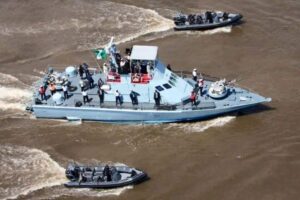 The second and certainly more significant was the sentencing of 10 pirates to 12 years jail term each, by a Federal High Court sitting in Lagos.

The twin events which happened penultimate weekend, once again brought attention to the notoriety called sea piracy and maritime crimes in Nigeria.

Prosecution counsel Laraban Magaji said the 10 pirates violated Section 3 of Suppression of Piracy and Other Maritime Offences Act, 2019, punishable under Section 2 of the same Act.”

In the course of the trial, the government told the court that the defendants “while armed with weapons, committed an illegal act of violence against the crew on board FV Hai Lu Feng II belonging to Haina Fishing Company by putting them in fear in order to take control of the vessel.”

The sentencing of the pirates comes on the heel of the decline in the number of kidnappings in the Gulf of Guinea. According to the IMB report which was released earlier in July, kidnapping of seafarers by pirates reached its lowest level since Q2 2019.

The sentencing itself is a good elixir for the recently-launched Deep Blue assets, which were acquired by the Nigerian Maritime Administration and Safety Agency (NIMASA) to fight piracy and maritime crimes within the nation’s waters and in the Gulf of Guinea. Of course, the most dominant player in the Gulf of Guinea is Nigeria.

Before the recent IMB report, the Gulf of Guinea had retained the unenviable rating as the world’s piracy hotspot. The notoriety is based on the incessant attacks on vessels and kidnapping of seafarers.

Similarly, the IIMB in its first quarter, 2021 report, declared that the Gulf of Guinea remained dangerous for seafarers, accounting for nearly half of all reported piracy incidents in the first quarter.

The IMB added that, pirates often raided ships in Nigeria to kidnap crews for ransom around the water regions.

According to the IMB, “Nigeria (Lagos-Apapa, Off Bayelsa-Brass, and Bonny Island-Port Harcourt): Pirates/robbers are often well-armed and violent and have attacked, hijacked, robbed ships and kidnapped crews along far from the coast rivers, anchorages ports, and surrounding waters.

This had been the scorecard for Nigeria for some years, we have taken over from lawless Somalia as the piracy hotspot in the world.

With all that it now has and with the recent judgement, NIMASA no longer has any excuse in the anti-piracy war.

There is the Suppression of Piracy and Other Maritime Offences (SPOMO) Act, which was signed into law by President Muhammadu Buhari in June 2019. The law gives effect to the provisions of the United Nations Convention on the Law of the Sea (UNCLOS), 1982, and the International Convention on the Suppression of Unlawful Acts against the Safety of Navigation (SUA), 1988, and its Protocols.

We are also aware that NIMASA has a working relationship with both the Nigeria Navy and the Nigeria Air Force. There is a subsisting Memorandum of Understanding exclusively for maritime safety.

The benefit of the subsisting MoU is apparently responsible for the conception, implementation and the final official launch and subsequent full deployment of the various maritime assets under the NIMASA Deep Blue Project.

The Deep Blue Project is a US$195 million Integrated National Security and Waterways Protection Infrastructure, and a collaboration between the Federal Ministry of Transportation, represented by NIMASA, and the Ministry of Defence, represented by the security agencies – Navy, Army, Air Force, Police and the Department of State Services.

The Deep Blue Project comprises several components of highly sophisticated equipment, among which are (SMHs). These helicopters are equipped to carry out different kinds of operations, including search and rescue, as well as special operations that may be needed as situations require to guarantee round-the-clock security and safety of Nigeria’s waterways through enforcement of the relevant laws. The SMHs capability in the areas of security surveillance, as well as search and rescue, would make it possible for Nigeria to meet International Maritime Organization’s (IMO) requirement for maritime administration.

The fact is that, NIMASA has a statutory responsibility to keep Nigeria’s waters (especially the country’s exclusive economic zone) safe and secure.

For many years, NIMASA had excuses for the apparent vulnerability of ships trading in Nigerian waters and those coming in. And that was why Nigeria ranked as the number one hot spot, and Niger Deltans became notorious for piracy and kidnappings.

The fact is that, NIMASA now has the assets and the legal teeth to bite, thanks to the Suppression of Piracy and Other Maritime Offences Act. The Act now makes it possible for maritime criminals engaging in piracy, kidnapping and others can now be prosecuted in a court of competent jurisdiction in Nigeria.

We agree that, one of the statutory responsibilities of NIMASA is to keep Nigeria’s waters, especially the country’s exclusive economic zones, safe and secure. We also know that, failure to act this role has over the years made Nigeria to lose the huge benefits of its position as a huge maritime nation in West and Central Africa. The loss is substantially as a result of insecurity in the Gulf of Guinea, where she sadly accounts for more than 70 per cent of trade.

We dare say that, with the huge maritime assets in its possession, NIMASA now has to walk the talk. It should no longer be business as usual.

Read Also:  Do you think that the SPOMO Act and the Deep Blue Assets are sufficient to suppress piracy?

In addition, the possibility of the criminals moving inward is quite real. This may be the next challenge that NIMASA will have to contend with. If nothing at all, the kidnap of eight persons, including members of the Maritime Workers Union of Nigeria (MWUN) is a pointer to what may be ahead.

The speed at which NIMASA intervened to secure the release of the abductees may be because some members of the workers’ union were involved.

The direct involvement of NIMASA in negotiating the release of the kidnapped travellers was openly acknowledged by the union in a statement signed by its President General; Comrade Adewale Adeyanju.

In the statement, the union confirmed the deployment of the arsenal from the deep blue assets to ensure the release of those kidnapped.

It is obvious that, maritime criminals may shift their activities to the riverine and creeks which seem to be more prone and vulnerable.

We advise that, while NIMASA is devoting ample time and assets to the fight against piracy and other maritime crimes, it must not lose sight of the vulnerability of the creeks and the riverine areas. This calls for more collaboration with the armed forces, especially the Navy and Marine Police.