There is no doubt that a high percentage of vehicles coming into Nigeria violate the Federal Government’s automotive policy, especially as it concerns age limit. 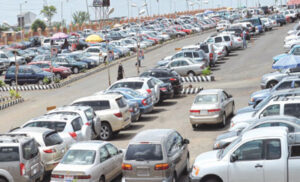 Recent investigations carried out by our correspondents at two biggest vehicle terminals in Lagos as well as the popular Berger Auto Market Apapa confirmed this.

Even though government had in 2010 raised the age limit of vehicles to be imported into the country from 10 years to 15 years, investigations also revealed that the Nigeria Customs Service is deliberately violating this trade policy by allowing ‘older’ vehicles to come into the country.

Going by the government directive, vehicles manufactured in 2003 and before are not supposed to be cleared by the Nigeria Customs Service.

But, confirming the influx of over-aged vehicles, General Manager of PTML Terminal, Mr Tunde Keshinro had in an interview with this newspaper confirmed that the terminal is flooded with damaged, ‘accidented’ and relatively low grade vehicles.

Keshinro confirmed that importers now bring in low-grade, salvaged vehicles, and these are equally older models rather than newer models. He said, relatively, majority of the vehicles being imported were manufactured before 2010.

It is a surprise that rather than see more of newer vehicles of 2013, 2015, 2017 and 2019, what comes in are vehicles that have one defect or the other and which are much older than the prescribed age bracket. It has also been confirmed that, Customs officers release vehicles manufactured in 2003 and 2004.

We recall also recall that, in 2020, the Federal Government slashed levy on imported cars from 35 percent to five percent.

Details of the slash in levy on imported cars as contained in Finance Act 2020, also showed that the import duty on tractors and motor vehicles for the transportation of goods was slashed from 35 percent to 10 percent.

And a few months ago, the Nigeria Customs Service again released a circular announcing the reduction of import duties on both used and new vehicles.

In a statement, the service said the new duty rate for both used and new vehicles is now 20% as against the 35% usually paid. The statement noted that implementation will take effect immediately.

Justifying the development, the Customs had stated that, its focus is in line with National Automotive Policy and other fiscal policies of the government.

In between the time that the auto policy was formulated and now, a lot of issues related to policies and government interventions have come up.

Some of the policy directives have had to do with adjustment and re-adjustment of import duty on categories of vehicles to be imported.

The story of Ghana which embraced the same policy long after Nigeria is a clear departure from our experience as a nation.

The Ghanaian auto policy has not only brought automobiles assembly plants into the country, it has also reduced the age limit of vehicles to be imported into that country.

The automotive policy the Ghanaian government had put in place will effectively rapidly phase out used car importation over the next few years.

The case with Nigeria is a clear departure from a viable and attractive automotive policy.

Policy directives on importation of used vehicles into Nigeria smirks of inconsistency and un-seriousness. It is a direct negation of the auto policy. It is even now more apparent that the auto policy has been jettisoned tactically by the present administration.

This is apparent because, as pointed out earlier, the Finance Act which stipulates a downward review of excise duty on tractors and motor vehicles for transportation.

With the twin issues of high cost of foreign exchange and Customs arbitrary adjustment of duty payable on these vehicles, we are afraid that the Nigerian business of importation of used vehicles if in a mess.

The best way out for Nigeria, at this point ids a holistic review of the nation’s almost 10-year old automotive policy.

Read Also:  What solution will you proffer to the high cost of imported used vehicles in Nigeria?

From available data, Nigeria produces less than 10 per cent of the vehicles used in the country. The Federal Government initiated the Automotive Policy in a bid to provide a framework that will support automobile companies, boost local content and establish a vehicle financing scheme that would provide funds for citizens to buy new cars.

The policy represents government’s boldest step at reviving local car assembly in over three decades. The policy seeks to encourage local manufacture of vehicles while phasing out the importation of used vehicles.

Other motives of the policy include job creation, stimulation of the value chain, diversification of the economy, provision of affordable vehicles for the average Nigerian, as well as boosting foreign direct investment into the country.

In trying to implement the automotive policy, the National Automotive Design and Development Council (NADDC) increased tariff on importation of new vehicles to 70 per cent as a way of discouraging Nigerians from buying vehicles from outside the country.

But, the objective of the policy has been largely defeated, owing to the apparent seriousness of the part of the Federal Government.

A review will clearly take care of the lapses that have been identify in the 10 years that the auto policy has been in existence.

It is a shame that while some smaller African nations are already placing total ban on importation of used vehicles, Nigeria is opening her borders to all manners of scraps in the name of used vehicles.

A new and effective auto policy is far better than the present unrealistic and uncoordinated review of duty payable on imported used vehicles.