Amidst an “unacceptably high plateau” in COVID-19 cases and deaths globally, the UN health agency chief has shone a light on recent death toll that totalled?almost 90,000 people and 5.4 million reported cases. 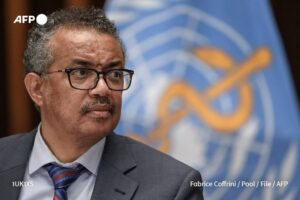 Despite decreased instances in most regions, including the two worst-affected – the Americas and Europe – World Health Organization (WHO) Director-General, Dr.?Tedros Adhanom Ghebreyesus, told journalists at a regular press briefing, “any decline is welcome, but we have been here before”.

“Over the past year, many countries have experienced a declining trend in cases and deaths, have relaxed public health and social measures too quickly, and individuals have let down their guard, only for those hard-won gains to be lost,” he warned.

The WHO chief said in Southeast Asia, however, COVID cases and deaths are increasing rapidly and there are countries in every region where the figures are ticking up.

A UN statement said on behalf of the WHO Foundation, Dr. Tedros launched the “Together for India” appeal to help fund the UN agency’s work in the country, including the purchase of oxygen, personal protective equipment and medicines.

Noting the spread of variants, increased social mixing, the relaxation of public health and social measures, as well as inequitable levels of vaccination, he said: “Globally, we are still in a perilous situation.”

While vaccines are reducing severe disease and death in countries fortunate enough to have them in sufficient quantities, the “shocking” global disparity in access remains “one of the biggest risks to ending the pandemic”, underscored the WHO chief.

Despite early results suggesting that vaccines might also drive down transmission, he explained that while high and upper-middle income countries represent 53 per cent of the world’s population, they have received 83 per cent of its vaccines.

And by contrast, low and lower-middle income countries, which account for 47 per cent of the global population, have received just 17 per cent of the shots supplied by manufacturers so far.

“Redressing this global imbalance is an essential part of the solution,” that also requires a combination of public health measures.

“Vaccines prevent disease. But we can also prevent infection with public health tools that have been so effective in so many places,” said Dr. Tedros.