WHO Director-General, Dr. Tedros Ghebreyesus, stated this in an online COVD-19 media briefing. 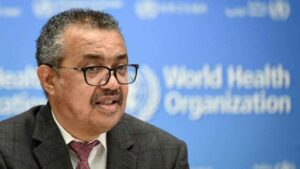 “This is very encouraging. But there is no guarantee these trends will persist. The most dangerous thing is to assume they will.

“The number of weekly reported deaths may have dropped by more than 80 per cent since February, but even so, last week one person died with COVID-19 every 44 seconds,’’ Ghebreyesus said.

Ghebreyesus said that most of those deaths were avoidable.

“One might be tired of hearing me say the pandemic is not over. But I will keep saying it until it is. This virus will not just fade away,” he said.

He said the WHO understood that many governments were dealing with multiple challenges and competing priorities.

Ghebreyesus said that to support governments, WHO would next week publish a set of six short policy briefs, outlining the essential actions that all governments could take to reduce transmission and save lives.

He said the briefs would cover the essential elements of testing, clinical management, vaccination, infection prevention and control, risk communication and community engagement, and managing the infodemic.

“We hope countries will use these briefs to reassess and readjust their policies to protect those most at risk, treat those who needed it and save lives.

“The pandemic is always evolving, and so must the response, in every country.

“Even as we continue to respond to the pandemic, work is progressing to put in place the measures to keep the world safer from future epidemics and pandemics,’’ Ghebreyesus said.

He said that in November 2021, WHO’s Member States made a historic decision to negotiate a new international accord on pandemic preparedness and response.

“Just as countries have come together before to agree on treaties on the threats posed by tobacco, nuclear weapons, and climate change.

“So now countries are coming together to agree on a common approach to the common threat of epidemics and pandemics,’’ he said.

“But this is not a discussion for governments alone.

“Pandemics threaten every single person on earth, so it’s important that everyone can have their say on what this landmark international agreement looks like,’’ WHO boss said.

According to him, to enable that to happen, WHO is holding public hearings, to give as many people as possible the opportunity to have input into the negotiating process.

He said that the first round of public hearings was in April, and the second round would be held later in September.

“We invite everyone, everywhere to have their say, by submitting a video statement between the 9th and 13th of September, responding to this question.

“Based on your experience with the COVID-19 pandemic, what do you believe should be addressed at the international level to better protect against future pandemics,’’ Ghebreyesus said.

He said that the WHO was looking forward to receiving many suggestions and ideas, from as many countries as possible.