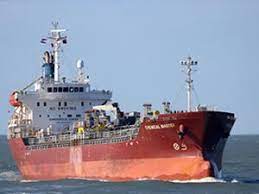 Fire broke out in engine room of product tanker CHEMICAL MASTER at night Nov 22 off Portugal coast, Atlantic. Two crew were badly injured and medevaced by Portugal Air Force helicopter, they’ve been transferred to hospital but unfortunately, died, reportedly in the morning Nov 23. Tanker is disabled, adrift, with 2 Portugal Navy ships nearby, monitoring situation. Situation unclear, it is not known if crew managed to extinguished fire – most probably, engine room is sealed with firefighting system being switched on. Understood towage pending, tanker is en route from Haifa Israel to Amsterdam.

The ship interrupted voyage to medevac a crew member, who was badly injured in an accident in engine room, understood on Nov 22 or Nov 23, when the ship was sailing along northwest coast of New Guinea, Indonesia, en route from Sydney to Shanghai. Filipino seaman was medevaced by Indonesian Navy, and transferred to hospital, JPO AQUARIUS resumed voyage with ETA Shanghai Nov 25 (she probably, won’t make it in time). Character of accident unknown.

Container ship HYUNDAI GOODWILL had to interrupt her voyage from EU to Busan Korea, to medevac a crew member, who was badly injured in an accident in engine room, understood on Nov 22, in Arabian sea. The ship sailed to Kochi India, arriving at Kochi anchorage in the evening Nov 22. Indian CG paramedics team boarded HYUNDAI GOODWILL and administered first aid, prior to medevac. Sailor was transferred to hospital, HYUNDAI GOODWILL resumed voyage early in the morning Nov 23, ETA Busan Dec 6. Character of accident unknown. 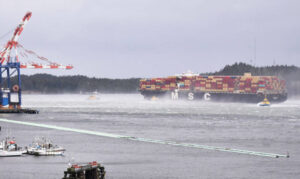 Container ship MSC ALTAIR broke off her moorings at around 1400 Nov 24 at Prince Rupert Harbor, Canada, and drifted aground, in strong wind. The ship was refloated with assistance of several tugs, and taken back to berth, no damages reported. She left Prince Rupert at around 0000 UTC Nov 25, and as of 0230 UTC Nov 25 was under way, heading obviously, for outer anchorage in Chatham Sound, to wait out bad weather.

General cargo ship AQUILA ran aground on a northeast coast of Myodo island, Yeosu, Korea, at around 2300 Seoul time Nov 24, while approaching Gwangyang Port. The ship went out of control after steering was disabled by generator failure. She was refloated in the morning Nov 25 and taken to inner Gwangyang Port anchorage. No reports on damages, possible hull breaches, etc., though there might be some.