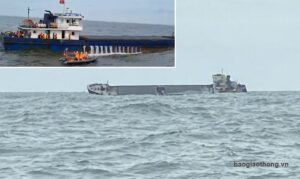 General cargo ship THANH DAT 18-BLC sank on Oct 2 some 12 nm SE of Hai Phong, Vietnam, Gulf of Tonkin. Ship’s superstructure including upper deck is partially above waterline. Wreck position is marked with buoy. Understood crew are safe, the ship was approaching Hai Phong en route from Phu My, southern Vietnam. Most probably, the ship was caught in typhoon.

Rumors were that container ship TSS PEARL was on fire or disabled by fire in Red sea. Ship’s last AIS was around 2000 UTC Oct 5, ship was already adrift. She’s en route from Jeddah to Aden, ETA Oct From the look of her, ship is suffering a major fire which erupted in containers, with thick black smoke billowing from burning containers, superstructure is engulfed in smoke and probably, fire, and is obviously uninhabitable. All 25 crew abandoned the ship and were rescued, understood by passing tanker. Later they’ve been taken by Saudi Arabia CG and disembarked at Jazan Port, Saudi Arabia, all are safe. Ship’s AIS is off – no wonder here. Passing ships in the area give burning ship’s location a wide berth, understood avoiding possible toxic smoke, fumes and explosions.