Passenger ro-ro ferry GUNSA 8 caught fire in the afternoon Jul 12 in Bangka Strait waters, between southeast Sumatra and Bagka island, while en route from Bangka to Tanjugn Api-Api, Sumatra. Fire reportedly, started in engine room. All 86 persons on board were safely evacuated and transferred to nearest port. Ship’s status unclear, probably burning. Her AIS is off for more than a year. 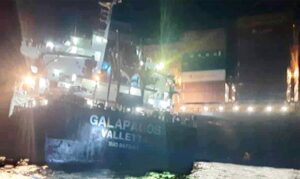 Mega container ship ZEPHYR LUMOS collided with Panamax bulk carrier GALAPAGOS at 2050 LT (UTC +8) Jul 10 in Malacca Strait off Melaka, Malaysia, halfway between Singapore and Port Dickson. Both ships were proceeding in western direction. Why did they collide, is yet unclear. ZEPHYR LUMOS struck GALAPAGOS in starboard cargo deck area, obviously inflicting heavy damages. Ships parted after collision and both were anchored, GALAPAGOS near or at collision site, ZEPHYR LUMOS to the north of collision site. As of 0500 UTC Jul 11, both ships remained anchored, both ships AIS on.